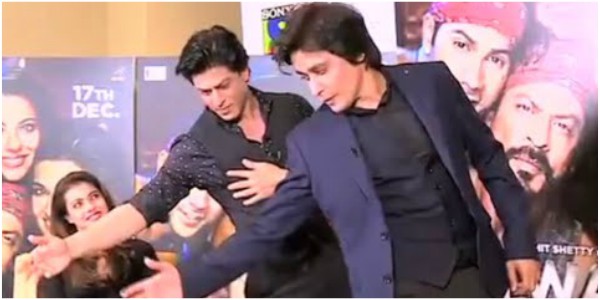 The trailer of Pakistan’s first online movie, Oye Kuch Kar Guzar, has recently released and we are amazed to see how Ali Safina takes a jab at morning show host turned film maker, Sahir Lodhi in it.

The trailer opened with a dialogue that seemed to be inspired from Sahir Lodhi’s upcoming film, Raasta.

This is what Ali Safina said…

Is it Ali’s conscious effort to kick off the trailer with this dialogue or a mere coincidence? Well, only Ali Safina has an answer to it.

Knowing Ali Safina’s great sense of humor we find it as a great attempt to take a dig at Sahir Lodhi who is often criticized for imitating King Khan in his radio and morning show.

With a little research and a quick surfing on internet we found that the iconic dialogue,  dunya mai do tarah ka log hote hai – was actually inspired from SRK dialogue in Happy New Year. Don’t believe us, here take a look!

Even Bollywood mega star,Amitabh Bachchan has used similar lines a far earlier than SRK and Lodhi.