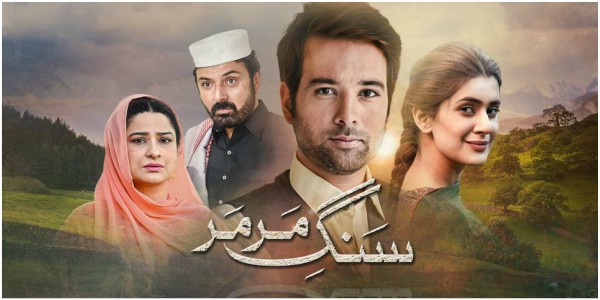 If I say Sang-e-Marmar has been the best drama serial I have seen in recent times then I won’t be wrong. I wait anxiously for it every week and really can’t guess what will happen in next episode.

However, this episode has been a little predictable. After the death of Safiullah and Gullalai we knew that Gulistan Khan’s family would be in mourning mood but we didn’t know that new wound would help in healing old sores – those who were away would come closer while tears would wash off years long grievances.

Shameem – a single word when came out of Gulistan Khan’s mouth literally shook his wife taking her back to her initial days of courtship which involved immense humiliation. It was the most memorable scene from the episode overloaded with emotions and had potential to bring tears in eyes. Shameem had always tried to be loyal to her husband, blindly followed all his order, ignored herself and live for him and his children – but after so many sacrifices she was still empty-handed, banging her head down in distress for yet another big loss of her life.

Gulistan Khan also got shattered after losing his strong arms and felt devastated. His only son, Aurang, was the only ray of hope for him. The episode featured an interesting conversation between Daa Jee and Aurang where both finally made an attempt to remove the long-existed misunderstanding.

Gulistan Khan’s conversation with Torah Khan was another epic moment of the serial. Although Torah Khan intelligently dodged Gulistan Khan’s investigative bullets but it didn’t mean that he would never go through this inquiry again. Right now, GK was saddened and wasn’t concentrating on Torah Khan’s words otherwise he would easily gauge the nervousness in his tone.

The drama writer, Mustafa Afirdi has done a wonderful job for presenting realistic characters – from Torah Khan’s intention to take revenge or Gulistan Khan’s soft corner towards Shireen it all made sense especially in circumstances the character faced in lives.

Shireen was the poor victim who lost her everything in this battle of revenge – her husband and brother were gone and she didn’t have anyone to look up to it. She tried to find solace by reading Holy Quran but Sherbano didn’t spare her and accused her for whatever had happened. Although Shameem saved her from Sherbano’s wrath but it seemed dark clouds surrounded her from everywhere and she didn’t have any way to hide out.

On the other hand, Shireen’s bhabhi greedy nature also became evident. She mistreated her husband’s relatives and asked them to leave her house. The conversation she was having with mirror indicated his bad mental health- the loss of her husband affected her nerves and she lost her senses.

As far as performances are concerned, no actor was less than the other. They all have done a commendable job but my personal favourite are Sania Saeed and Noman Ejaz – I believe they both have taken the drama to another level with their mind-blowing act.