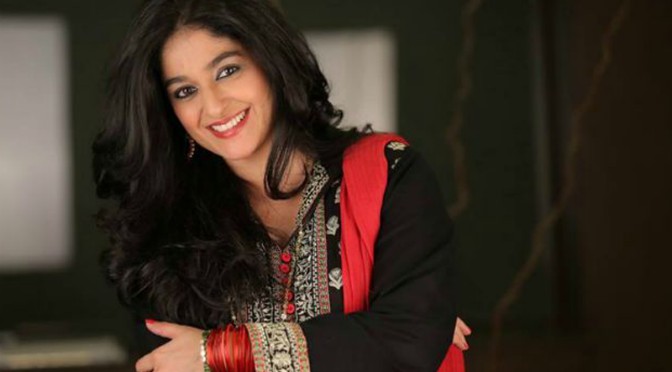 We all love Durr-e-Shehwar actress Nadia Jamil for her brilliant acting – her radiant smile and casual attitude light up the screen.

In terms of style the actress usually opts for a natural no-makeup look enhancing her beautiful eyes with kohl. Her attire on her morning show on Channel 24 is always causal and minimalist.

The star talks about her love of desi fashion on Twitter:

“My own style is really ethnic and simple but I have little imagination when it comes to styling – desi or bohemian,”

The epitome of elegance Jamil is in love with traditional ghararas – and wearsthem whenever gets a chance. She says she likes them because they are “cool and easy to wear.”

On her morning show ‘Weekend with Nadia Jamil’ on Channel 24 she wore a classic piece from her collection – a white and blue cotton gharara.

Having roots with Bengal the actress has a deep liking for sarees – and posses a magnificent collection of cotton saris especially bought from India and Bangladesh.

Talking about sarees she said that she loves to don them ‘most at home’.

The ingénue actress says that she loves to wear well-tailored shalwar kameez. “Patiala shawars,I love!,” she told fans. The final touch to the suit according to her? A beautiful chiffon dupatta.