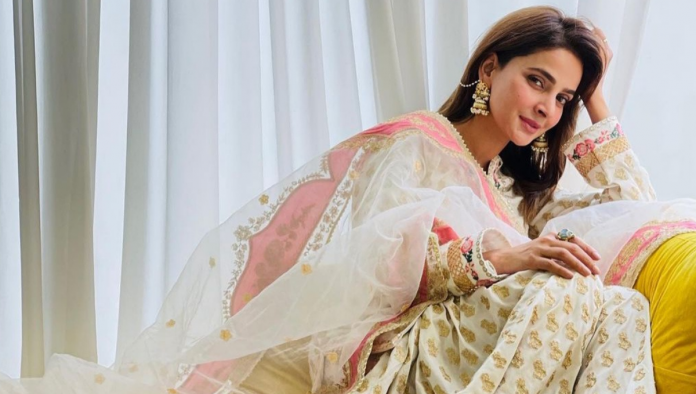 After giving a power packed performance in ARY Digital’s blockbuster drama serial, Cheekh, the ravishing Saba Qamar is all set to impress her fans once again on small screen in an upcoming drama serial, Tumhare Husn Ke Naam.

The actress took to Instagram to reveal the first look of her upcoming project. She shared an adorable picture with colleague Asad Siddiqui.

Tumhare Husn Ke Naam is an intense love story. Its story and screenplay has been done by Umera Ahmed, the drama is written by Sara Qayyum. It has been directed by Saqib Khan who has also directed Saba Qamar’s upcoming movie, Ghabrana Nahi Hai.

The lead cast of the drama also star the handsome Imran Abbas and the gorgeous Sidra Nazli in pivotal roles.

Saba Qamar’s character name in the play is Salma whereas Asad Siddiqui plays Atif’s role in it. Imran Abbas as Sikander brings the major twist in this love triangle.

The pictures shared on Instagram by the actors have already raised our curiosity and we are anxiously waiting for it. It’s release date hasn’t been announced yet.