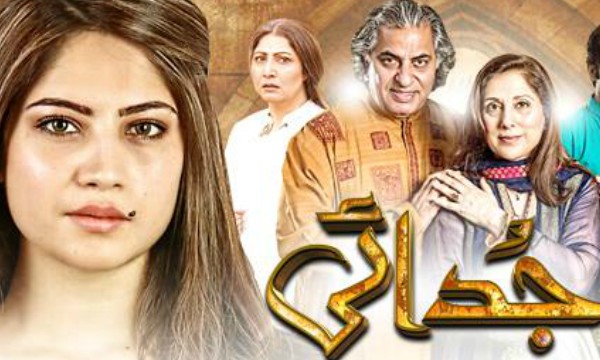 ARY Digital’s latest drama serial, Judai, is although about dusri shadi and its consequences but the stellar acts of multi-star cast remain the highlight of the play.

Initially titled as Khali Aasman, the play has been directed by veteran Roomi Insha whereas Parisa Siddiqui has written it.

The story so far:

The drama is about Hassan and his happy family which consists of loving wife, Mehr and two sons, Haider (Khalid Malik) and Hamza (Affan Waheed). The elder son, Haider, looks after the family business and is now getting married to the love of his life Alia (Sana Askari) with his parent consent. The younger, Hamza, is in Lahore for study and travels back and forth to stay in touch with his family. He loves a middle-class girl Zeena (Neelam Munir) who is his university fellow.

Zeena has a complicated family set-up – she lives with her widow mother (Saima) and brother (Imran Aslam).  Her mother is a patient of severe depression as she is unable to overcome her husband’s sudden death in an accident. Zeena, in order to escape from the hardships of life, tries to spend maximum time in study. She often complains her brother about their worse conditions. She doesn’t want to take financial help from her father’s friend who regularly sends a handsome amount to run their errands.

The story progresses at fast pace and Hamza comes from Lahore to Karachi to attend his brother’s wedding. While the whole family is busy in celebration, Hasan in his drawing hands over a cheque to his loyal lawyer and great friend, Junaid (Firodus Jamal). Meanwhile, Mehr comes and asks them to join mehndi ceremony.  The twist in the story comes when on the wedding night Hasan suffers a major heart attack. Fortunately, he recovers from this major illness and in the promo he has shown to confess something really important to his wife.

Junaid’s daughter, Manahail(Faryal Mehmood) also has an important role to play in the serial – so far she has shown as Hamza’s childhood friend. Her mother (Huma Nawab) wants her to marry in Hasan’s family – earlier she considers Haider an ideal suitor for her daughter and now she keeps her eyes on Hamza for it.

What we loved about the play

So far we have been introduced to the lead characters of the drama but the complexity of their lives increases our curiosity and we want to know more about them. The real life couple, Samina and Usman Peerzada’s, awesome chemistry is the highlight of the play. Samina is shown as a loving mother who genuinely cares for family. Unlike the zalim saas of our dramas, she is liberal and gives space to her new bahu to adjust in the family. When Alia refuses to wear their traditional duppatta on her big day, Mehr handles the situation really well. It is delighted to see her shine as a modern confident being. Saima as Zeena’s mother is also very much in her character – she brilliantly execute the agony of her life through her devastated stature. Neelam Munir, as usual, depicts her role with perfection and we also like Affan Waheed as a love struck Hamza. So far, Zeena and Hamza are unaware of the complexity of their relationship but they are in deep love with each other.

Is there any connection between Hamza and Zeena’s family? What Hasan wants to confess to hish wife? Will Haider’s attitude change towards his family after marriage? To know all this we have desperately waiting for next episode to air on Wednesday at 9:00pm.

If this drama has missed your radar by any chance, we suggest you catch up to this classic ASAP!