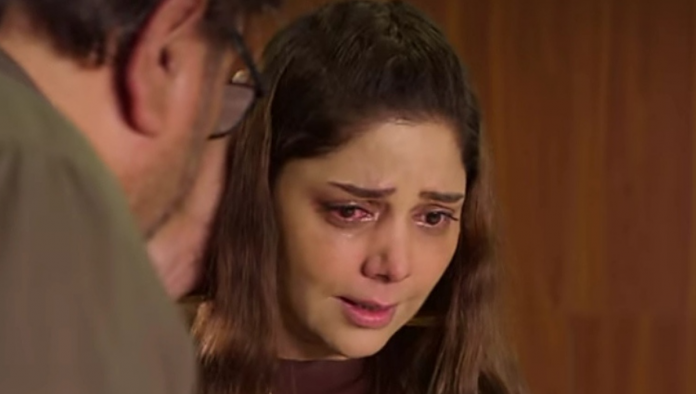 The episode belonged to Hadiqa Kiani – the affectionate Mehru won our hearts with her genuine emotions.

She was afraid of losing a man who gave her so much love in a few days that she yearned for her entire life.  On the flip side, she was a helpless mother as her son’s life was at stake too.

Kudos to the actress for pulling the role impeccably. Her innocent and pure expressions make Mehru a relatable person.

Mahir, on the other hand, had played his cards wisely. He gained Mehru immense trust by refusing to divulge Affan’s name in front of the police.
Bilal Abbas Khan played Mahir’s role with ease- the way he treated Mehru showed that he genuinely cared for her. However, we knew there would be more to his character than just being a good guy. By the end of the episode, the dark side of his personality got revealed.

We also felt empathy towards Mahir’s father (Shabbir Jan) the love between father and son got overshadowed by misunderstanding created in the past. The veteran actor, Shabbir Jan, gave a new life to cliched character with his superb acting skills.

Ambar Khan’s as a manipulating MIL was a treat to watch. She had started devising schemes to get financial control over Mehru’s wealth. She advised her daughter to force Affan to return to his mom’s house or else Mahir would take over everything( and we know her doubts will turn into reality).

Let’s see who would make the next move in the drama – Mahir, Affan, or Zameer?