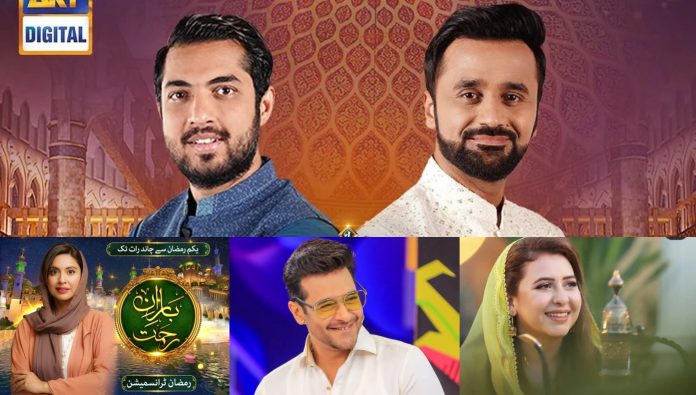 The Holy month of Ramadan is just around the corner, while we are excited to celebrate this season with religious devotion our media bigwigs are busy in developing strategies to earn maximum financial lucrative all this month.

A couple of weeks ago Ministry of Religious Affairs wrote a letter to Prime Minister Imran Khan suggesting guidelines for media organizations regarding Ramazan broadcasts.

According to these guidelines, the transmission shall be anchored by religious well-versed, and educated persons and they should follow modesty in their dress code and appearance to honor the sanctity of the holy month of Ramadan.

It also mentioned that controversial religious matters shouldn’t be discussed and sanctity of all religious personalities and sects should be maintained.

Special instruction has been given related to game shows that they shouldn’t be aired before or after Sehar/Iftar timings.

Putting aside any guidelines almost all the channels have signed prominent showbiz personalities to host Ramzan transmission and none of them has picked any religious scholars for the task.

Here is the list of Ramzan transmissions and its host who are going to entertain us throughout this month.

Replacing Sahir Lodhi, the former morning show Dua Malik has been taken on board for News One’s Ramdan show titled as Barkat-e-Ramzan.

This is the first time she will be hosting Ramzan transmission.

The actress has signed a contract with national television to host Ramzan transmission. She announced it by sharing a glimpse of the signing ceremony on social media.

BOL News has released a teaser of their transmission where the hosts are claiming to give the audience gifts worth millions including furnished houses, plots, and many other worthy items.

The transmission will be co-hosted by Sahir Lohdi who will present special game show on the channel.

Sidra has been hosting Aaj TV’s Ramazan show for the past four years. She has also hosted Ronaq-e-Ramazan transmission for Dawn news and Ramazan shows for PTV Home, PTV News, Dunya news.

Iqbal has always been known for her sensibility and pious behavior and we expect her show to be more informative than transmission on any other channels.

Her show will be co-host by VJ turned actress Hina Altaf and Sherry.

Keeping the tradition alive, the channel has once again relied on its renowned current affairs presenters Waseem Badami and Iqrar ul Hassan to host religious show on the channel.

The Jodi is considered ‘a killing combination to get ratings’ offering a variety of informative content including naat competition, quiz competition, kids segment, and discussion with religious scholars.

She hosted Ramazan transmission on PTV last year along with Ahsan Khan.