Fighting the capital from the inside 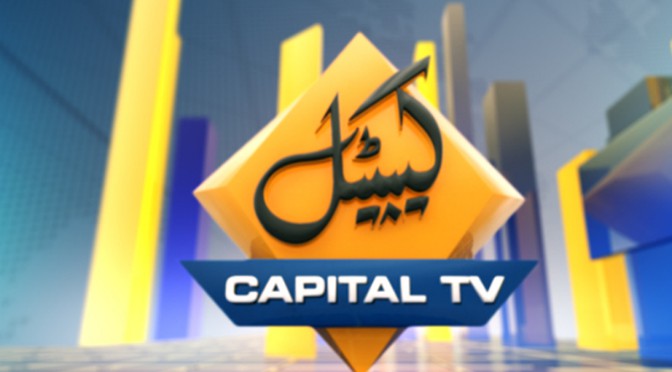 On April 23, 2015 every television journalist in Pakistan had one thing on their mind: reporting the NA246 elections – except the ones at Capital TV.

While the highly debated elections were held in Karachi, the frustrated Capital TV employees locked the Production Control Room at their headquarters in Islamabad and refused to work. Eventually, management was forced to run their transmission from a temporary set-up for the day.

Their protest came after three months of not being paid and most of them had zeroed their bank accounts completely – some of them could not even pay their utility bills.

*Rashid, a 29-year-old reporter from Karachi says he feels they were pushed against a wall.

“We had no option but to lock the PCR. We didn’t have a single penny in our pockets and management was asking us to roam around the city gathering the news. It just was not happening,”

As he talks to me on the phone his voice turns in to a muffled whisper:

Rashid and his colleagues have been scared of management blowback since payment issues became public in 2013 – the same year the channel went on air.

In the newsroom of Capital TV journalists are trying to use social media to stay anonymous while organizing their dissent against the management – most of them fear losing their jobs if they are identified as being too vocal or visible.

Yesterday, when Capital TV owner Hashim Riaz Sheikh returned to work after a honeymoon abroad with wife and politician Sharmila Farooqui he called a meeting at the Karachi bureau where he told staff in no uncertain terms that salary non-payment was not to be discussed with outsiders.

A young team member from the meeting reveals:

“He had just come back to the city and he called all staffers together and told us to remove our identity cards. He was screaming and cursing because someone had initiated a social media campaign to create awareness about the issue. ”

Over two years of being on air, Capital TV staff have spent at least a total of nine months waiting for salaries.

The salaries from January to March haven’t paid yet and when staff threatened to boycott management gave half salary of the current month while payment of last three months is still pending.

Taking notice of the issue Pakistan Federal Union of Journalists (PFUJ) has announced a protest in Karachi on May 1. President PFUJ Rana Azeem said that they have asked government to stop advertising on channels which are unable to fulfill the financial needs of its employees.

“We have sent letters to the federal and provincial information ministers regarding this issue and we are quite hopeful that the government will soon take action.”

*Names have been changed