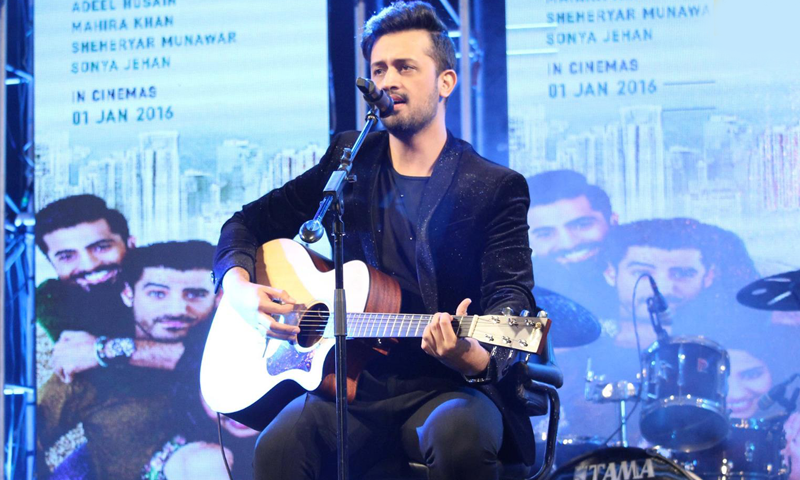 Asim Raza and his Ho Mann Jahan team went outside the metaphorical box to promote their upcoming venture. It all started with bloggers meet-up, Shakar Wandaan dubsmash, visit to university campuses in Karachi, and finally a mind-blowing concert (which was held to celebrate the success of the film’s music) in Karachi.

Featuring the film’s stars and singers, it was a night to remember with the likes of Asrar, Atif Aslam, Tina Sani, Fakhir, Zeb Bangash, Mai Dhai, and Jimmy enthralling the audience with their numbers from the film. However, the star of the night was Atif Aslam who stole the audience with his electrifying performance.

I reached Avari Towers fashionably late, but to my surprise, the who’s who of the industry, along with film’s cast and crew had already arrived and was heading to the the pool side where the event was being held.

Ahmed Ali Butt hosted the event and kept the audience entertained with his witty remarks on celebs – be it calling Ayesha Omer the Tutti Fruiti girl or taunting Fakhir for his evergreen looks.

The Music Success Night kicked off on a low note with Jimmy Khan singing Barish. Honestly speaking, more than Khan’s vocals I was interested in Sonya Jehan and Shehreyar Munawar’s performance – they immediately rushed to the stage and started dancing on the song, providing delightful visuals for audience.

It was Fakhir though, who set the right tempo for the concert by giving a thrilling performance on two of his popular songs. Dedicating Aye Jawan to the Ho Mann Jahaanteam, he took the concert to the next level by forcing everyone to get off their seats and dancing with him.

After Faakhir was Zeb Bangash; she was truly magic with her haunting voice when singingMann Ke Jahaan and Dil Pagla. Adeel Hussain and Mahira Khan joined Bangash on the stage – while Khan was dancing on her own, Hussain rushed to the drummer’s corner to enact a scene from the film where he plays the drums during a concert in college. Unfortunately, he didn’t find the drum sticks and ended up dancing with Khan. Asim Raza, Sonya Jehan, and Shereyar Munawar also joined them for masti.

The queen of live performances, Tina Sani mesmerized the audience in the truest sense when she sang two beautiful kaalams of Faiz Ahmed Faiz– one dedicated to small kids of Army Public School incident.

Asrar’s performance on Shakar Wandaan was another wonderful moment of the night. But the one performance that got a standing ovation by the audience was Mai Dhai’s. The power of her strong vocals struck the right chord among the listeners and we were completely lost in beauty of her ethic sound.

Atif Aslam, all of a sudden went on the stage and kissed her hands in admiration of her performance.

Later, he rocked the stage with unforgettable act on his popular songs. Starting off with a mash-up of Woh Lamhe, Hona Tha Pyar, and Doori, he enthralled everyone. The audience was simply smitten when he sang Jhula Jholaya and forced them to get up and dance on his fast tunes. The most memorable was his rendition of Ho Mann Jahaan’s Dil Kare. He came down off the stage to connect with the audience and also took selfies with them.

All in all, team Ho Mann Jahaan did a fantastic job with the marketing of the movie.