Miss DramaticSpice up your life with showbiz tadka.
Home On the sets... On the sets of Yasir Nawaz's 'Tum Kon Piya' for Urdu 1
On the sets...Uncategorized 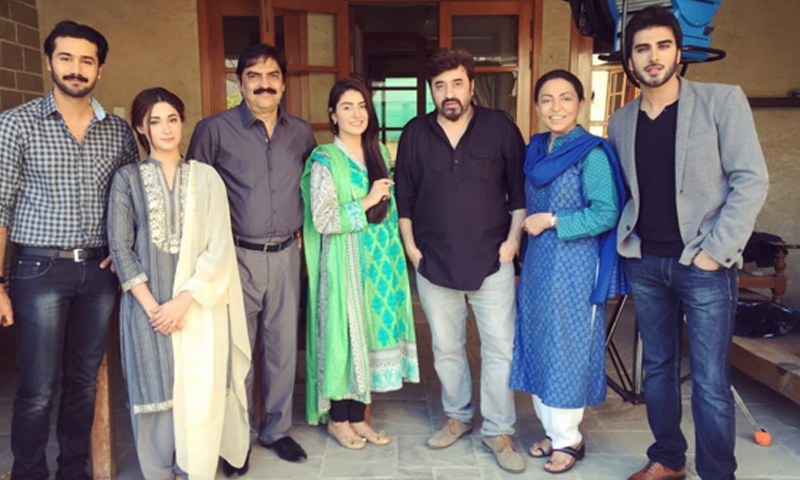 Yasir Nawaz’s upcoming serial Tum Kon Piya starring Ayeza Khan and Imran Abbas has certainly been a talked about project recently as it is Ayeza Khan’s comeback serial after getting married and having a baby. When we got an opportunity to visit the sets we took it without thinking even for a second.

The shooting was at the luxurious bungalow in the Khayaban-e-Tanzeem as that was selected as Ramaish’s (Imran Abbas) house in the serial. An important scene between Ramaish’s parents was being shot at the top floor, but before recording it on camera I rushed to lounge area down stairs to meet our stars.

The first person I spoke to was the extremely humble and friendly, Imran Abbas. The actor explained the reason he opted for this serial stating:

“Tum Kon Piya has several highlights – it was Yasir bhai’s first serial after the blockbuster film Wrong Number. Ayeza was also making her comeback after marriage and of course it had me in a romantic role. It is also based on Maha Malik’s best seller novel, so obviously all these factors increased the appeal of the serial.”

When we asked Abbas about being typecast in romantic roles, he said it was something he always enjoyed doing in dramas.

However, he maintained that his character is not a conventional and that there were a lot more dimensions in the role.

“Ramaish is not a conventional lover and he goes through the thick and thin of life before turning into a mature guy. As the story is spread over certain period of time, audience will see a transition from a young boy to a mature man,” he added.

As Ramish is a trendy and chic boy Abbas opted for wardrobe which was primarily composed of pieces from Zara Men and a few attires by Humayun Alamgir.

Sitting next to Imran Abbas was the gorgeous Ayeza Khan. We asked her about the comeback, especially since rumors were doing the rounds about her leaving showbiz for good.

“Those were merely rumors as I always knew that I would return after a break of a year or two. Fortunately, I came back much earlier of what I had thought before. Apart from the fact that I had an important role to play in the serial, it was Yasir bhai who brought me back to showbiz so early. He called and said that he wanted me to do this role in the serial,” she said.

Revealing a bit more about her role, Khan said that there were a few traits in her character which made her different and appealing than any ordinary girl.

“I play a role of Ilema, she is extremely obedient and never says no to her parents. Whatever tough situations came in her life she handled it with maturity and by remaining strong. Lastly, I loved the loyalty factor; once she married someone she remain loyal to him no matter whatever happened,” she said.

Khan further added that she had given special attention to the styling and wardrobe of her character.

“Initially, as a young girl I wear a lot of bright colours, but as the character progresses, the colour tones change to subtle shades. It finally comes to a point where we gave her a complete no-makeup look with extremely simple clothes,” Khan said.

“Zarbab is a very simple guy who gets married to a girl he doesn’t know. He loves his wife, but he can’t ignore the nagging of his mom who constantly complains about her. So it is a struggle of a man to be a responsible son and a caring husband at the same time,” Abbas said.

Abbas gave vital importance to his look in the serial to distinguish it from Imran Abbas’s trendy persona.

“I wear oversized shirts with ordinary pants to look as simple as possible,” he stated.

Yasir Nawaz’s multi-starrer project has the talented Shameen Khan in the role of Neha – Ramaish’s wife in the serial.

“First of all, I must say that it has a brilliant script and you won’t believe that I don’t need to use glycerin in the scenes because the words are so impactful that you get the right emotional feel while portraying it onscreen,” Khan said.

Shameen Khan’s play Qavi Khan ‘s younger daughter, who after the death of father is at the mercy of circumstances.

“She is in such a miserable state; her father has died and both are elders sisters have met a bad fate so she doesn’t have option, but to marry any proposal that comes her way,” she said.

She further added that as the character progresses, you get to see her playing the role of a ‘healer’ in lives of the people surrounding her.

“Neha is shown as a very sensitive girl who stays strong through bad patches of life. She is actually a ray of hope for all those who have gone through emotional breakdowns in life,” the actress said while giving a little more infomation about her role.

After talking to the four lead characters, we went upstairs to meet the director and the remaining cast.

Yasir Nawaz was a bit busy in recording a scene, but took some time out to talk to us. The first thing I asked was about his decision to make a drama after giving a blockbuster film. His reply showed his passion towards his work.

“I actually decided to do a serial even before the success of Wrong Number. Television has given me an identity and I don’t want to leave it for something which I have just ventured into,” Nawaz said.

When we asked the director about the USP of the drama, he was quick to say that it was the couple Imran Abbas and Ayeza Khan and of course his own association with the project would also attract audience towards it.

Nawaz further added that he was always open for all sort of stories and never hesitates to experiment with different scripts.

“I am not the kind of director who restricts themselves to certain types of dramas or films, instead I prefer to choose variety of topics. Mujhe har jaga aur har tarah ka kaam karna hai aur har field ko explore karna hai. I want to do everything, be it family drama, action, love story, or a serious script, he said.

About Tum Kon Piya, he said it was a simple story and there was nothing bizarre about it.

“I decided to make a serial on Maha Malik’s novel because when I was reading it I thoroughly enjoy it. I thought if a simple story can strike a cord with me, it will definitely hook the audience too,” he said with conviction.

Nawar later introduced us to senior actors Azra Mohyeddin and Mehmood Akhtar – who play Imran Abbas’s parents in the serial.

Being a huge fan of Mehmood Akhtar’s acting, I talked to him first telling him his PTV plays were still fresh in my mind. While speaking about his role he said that,

“It is a very different character in a sense as I love my kids, but at times I becomes the biggest hindrance in their happiness. So there was a lot of margin for me to perform which we usually don’t find in typical father roles,” the veteran actor said.

Akhtar’s on-screen wife Azra Mohyeddin also joined in the conversation. Wearing a Dhaka pajama and long shirt with pearls earrings she was looking a bit different than the usual moms on television.

“On television we often get less chances to experiment a lot in senior roles so I add an extra flavor by focusing on my look. Throughout the serial, audience will see me in Dhaka pajamas and long shirts. I used antique jewelry items like Chand Bali by Amber to make my character look presentable on-screen,” she said in the end.

Tum Kon Piya is still in the shooting phase and will air on Urdu 1 in the first quarter of the coming year.