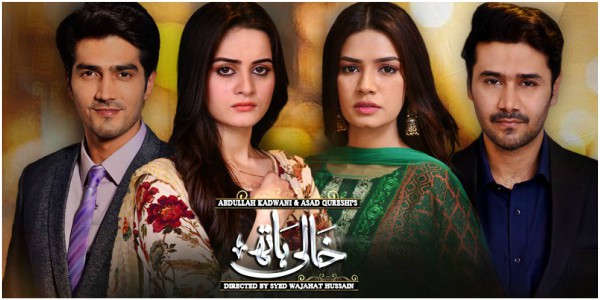 An actor per excellence, Ali Abbas, has done a superb job as a creepy brother-in-law in Khaali Haath. He has carried a shady role with such a nuance that you can’t stop hating for all his eeriness.

Khaali Haath is a story of three lovable sisters – Sobia, Mishal and Umaima. The eldest sister, Sobia(Kiran Haq) was married to Basil (Ali Abbas). Although their marriage was arranged by family but Basil was not happy with his wife and was more inclined towards Mishal(Aiman).

Basil met Mishal for the first time on his engagement and immediately fell in love. He married Sobia with only one intention that it would help him to stay closer to Mishal – but it seemed all his planning went wrong.

Despite Basil strong opposition, Mishal got engaged to her cousin, Haisam (Shehzad Sheikh) which, of course, wasn’t acceptable for him so he made plans to sabotage her engagement.

The writer, Seema Munaf, has dealt with a sensitive topic very sensibly and has beautifully shown the complexity of relationship of sister-in-law and brother-in-low without sensationalizing it.

I am sure just like mine, your nanis and dadis must have ruined your night-stay plans at friends’ place. I often call them orthodox for their conservative mentality but now I am convinced that their only purpose have always been to save us from any mishap.

Focusing on the same issues, Seema Munaf presents a story which is not true to its core but quite relatable in current times. After graduating from a co-ed institution, we may see things differently but it’s true that we don’t know about others intentions.

Mishal considered Basil as an elder brother and treated him well fulfilling the protocol of respectable relationship between them but he totally misunderstood her gestures.

He even tried to physically assault her times but she didn’t take much notice as mostly it was done at times where it couldn’t appear offensive. One such incident happened when Mishal was in hospital with Sobia – she lost her baby in a miscarriage.

Sobia’s mother broke down into tears after getting to know about the horrified incident happened with her daughter. As a sensible sister, Mishal tried to calm down mother – meanwhile, taking advantage of the situation Basil touched her and hold her hand tight as if he was helping her to stay compose.

Initially, Sobia found Basil’s attitude weird but soon she realized that her husband was trying to hit on her younger sister.

As I mentioned earlier, the highlight of this intriguing tale is Ali Abbas. He steals the show in a power-packed act. He brings out the right amount of shrewdness required for the role with a poker face. This role has given him a chance to come out of his comfort zone and show off his extraordinary skills.

In Khaali Haath, he has shown to have personality disorder where he often talks to himself and share his thoughts aloud. He poses to be a caring husband in front of Sobia but his cunning nature becomes evident when he kills his own baby in his wife’s womb just to fulfill his wish.

To see how far he will go to attain his desires keep watching Khaali Haath every Monday at 8:00pm only on Geo Entertainment.