Food Review: Hunger’s Pack is your next destination to grab a burger 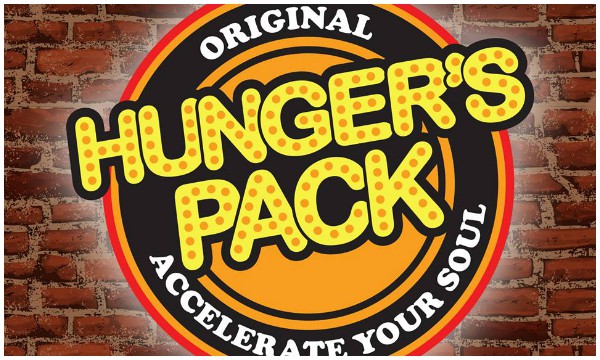 You don’t need to worry about binge eating and craving at night as a new yummiest burger joint, Hunger’s Pack has opened in the city.

Situated on the busiest roads of Saba Avenue, Hunger’s Pack is new fast food restaurant opened in the city – and if you go by our words they have a tempting list of options on their menu.

I recently got a chance to visit it on a request of a friend who was involved in the launching ceremony of the restaurant. It was a fun-filled blogger get-together where we got a chance to taste some of their wonderful offerings – included beef burger, peri bites and baked potatoes among others.

When I entered the restaurant the first thing I noticed was the big wall – which was not only pleasant to view but it had burger history beautifully written over it.

The sitting arrangement was comfortable too – I especially those eco-friendly legs of the tables decorated with big artificial leaves and stones.

As far as food was concered, I started off by ordering starters of the day which included chicken wings, baked potato and peri bites. I liked the sudden twist in baked potato serving as it was topped with chopped tomatoes and boiled corns with little bit of black pepper and salt sprinkled over it – I also felt that if there was also a slight addition of cream cheese in it. Overall, it was good to taste.

Next is peri bites served with creamy dip – it was awesome as expected.

For me, chicken wings were a big disappointed as the excessive use of Tabasco sauce ruined its flavor making it extra sour.

The next dish served to me was grilled sandwich – actually there were two options for it. One can either have it with brown bread or they served it in regular white bread also. I ordered white one while my husband being health conscious opted for brown bread serving. To our surprise, the filling of both sandwitches were similar as it had cream cheese, shredded chicken with seasoning and a lettuce to make it crisp. So, all those diet-conscious friends I don’t think so that you will find any healthy option over there.

After it, they served their speciality – giant burger and once again there were two varieties with beef and chicken patties. My choice was obviously chicken as I wasn’t a big beef fan. The burgers were served with crispy French fries and delicious vanilla shakes. That stamp on the burger was lovely so was the burger holder.

Honestly speaking, the shake was so yummy that I didn’t want to miss even a sip of it. It was creamy, rich in vanilla flavor with just right amount of sweetness. I totally loved it.

Burger was okay too – once again I was lucky as I picked a chicken burger and it has ketchup and chilli sauce spread over the bun whereas my husband’s beef burger had too much mustard which was too strong and left a bad taste in the mouth.

Although they had some great ice cream flavours to indulge after the yummy food but by that time I was so full that I didn’t want to taste anything at all. Overall, it was a delightful experience and I really want to visit that place again.