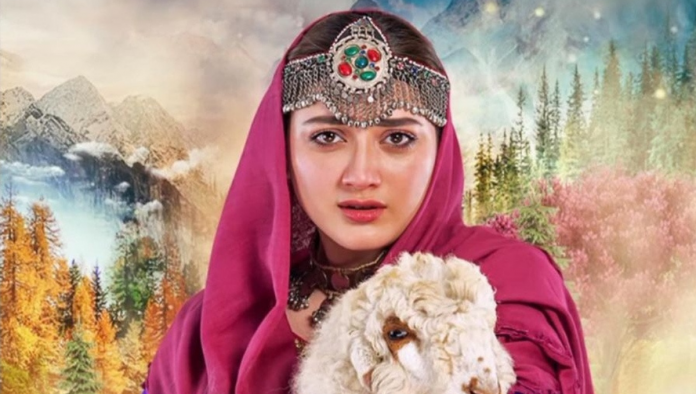 Momina Iqbal is all set to play a Pakhtun girl in Geo’s much-awaited drama serial Meray Humnasheen. The actress put a lot of effort to learn the accent and mannerisms required for the role.

Meray Humnasheen’ is Geo’s upcoming mega drama serial that showcases the rich culture and values of the Northern region of Pakistan.

Produced by the dynamic duo of Abdullah Kadwani and Asad Qureshi of 7th Sky Entertainment, the drama serial has a stalwart cast including Syed Jibran, Ahsan Khan, Hiba Bukhari, and Shahzad Sheikh.

The story is written by Misbah Ali Syed and directed by Ali Faizan. It will air on Geo Television after Eid ul Fitr.

Momina on playing a Pakhtun Girl

Belonging from Punjab, Momina finds it hard to play a Pakhtun girl. ‘I am playing Syed Jibran’s wife in the serial, and he has good command over the language.
It has been challenging to share the screen with him as I have to be as perfect as him to match with his craft,’ the actress stated.

She also shared that it took her two hours to record her first scene with him.
“The first day of the shoot was tough. When I joined the cast, they had already completed the first spell of the shoot. They all were familiar with the language , and I felt embarrassed for not getting the accent right. It took me two hours to record my first scene with Jibran. I couldn’t sleep properly and kept practicing until I got it right,” she added.

Momina on playing the negative character for the first time

Speaking about her role in the drama, Momina said that it wasn’t easy to play a negative person onscreen ‘ My character has negative shade , but all her actions are the reaction of whatever has happened with her in past – the viewers will get to know the back story of this character in later episodes, ‘ the actress said.

Momina Iqbal also told us that she recorded her scenes in unfavorable weather conditions.
The temperature dropped to minus , and we had to shoot a ‘rainy sequence’ in it. We were frozen to death while recording it. Once the shoot was over, and I watched the final cut, I couldn’t believe it as it looked magical,” she added.

The actress has an interesting lineup of projects

Momina is currently working on a horror serial with Geo Television. She has also signed Hum TV’s project , and its shoot will begin next month.