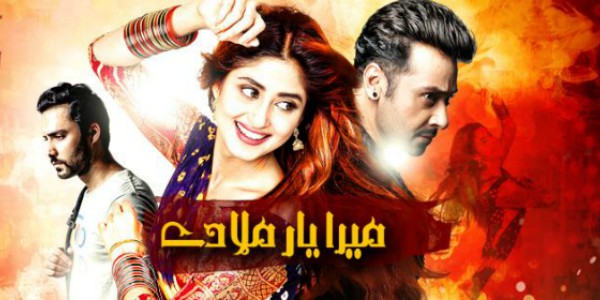 Anjum Shehzad’s latest serial ‘Mera Yaar Miladay’ may look like a typical love story but the awesome treatment and excellent production quality makes it different from others.

Set in a densely populated area of Karachi the play is about two lovers – Mashq and Fahad – where once again ‘larki ka baap‘ becomes zalim samaj in the love story.

The drama kicked off with the news about rebellious Mashq’s (Sajal Ali) who eloped from home as she couldn’t accept her father’s decision to marry a guy of his choice. On the other hand, her lover Fahad(Ahmed Ali), who lived in Lahore, was worried about her as he hadn’t informed his mom about his love and didn’t know how to make arrangements for her stay in Lahore.

Unfortunately, Mashq’s father caught her red-handed at the railway station before eloping and house-arrest her to avoid any further loss. When Fahad came to know about Mashq’s house arrest, he quickly made a plan to visit Karachi. Upon reaching the metropolis, his cell phone got snatched in which he had saved Mashq’s address – now he was clueless from where to start the search for his beloved.

While being in Karachi Fahad accidently met Striker – the right hand of Daboo Bhai( the Bhai of muhallah). Striker told Fahad that only Daboo bhai could help in finding his snatched cell phone. And there our hero made a grand entry in low-budget car beating criminals and warning them not to mess up with him.

What we loved about the serial

I loved the excellent production of the serial and great camera work. Kudos to Anjum Shehzad for hitting our television screens with yet another visually appealing serial! A lot of research and hard work must be involved in the characterization of every character. Colour and props were tactfully infused to add depth to the roles – when Mashq and Fahad fall in love they wear bright shades like orange and red to express their happiness. In a moment of despair, the girl was shown to wear black shades whereas the hues of purple and green were added in her surrounding to balance the equation.

As Fahad was shown as a carefree boy, his room was beautifully decorated with cowboy hats and guitar placed at a corner.

Now as far as acting is concerned, Sajal Ali, as usual, fits the role like gloves. When she was waiting at railway station she looked confused as well as excited to meet his lover. During house arrest, her teary eyes and impeccable facial expressions wonderfully depicted her painful state. Honestly speaking, I have not seen Ahmed’s work before and in this serial, I liked his sensible acting. In a role of local majnu, he was sweet and cute but I am waiting for his role to evolve in coming episodes so that we could gauge his acting skills.

The versatile Faisal Qureshi only had one dialogue in the first episode and he delivered it with ease and perfection. I liked his get-up as typical tapori of mullah where he dressed up in fitted jeans, rolled-sleeves checked shirt with waistcoat – bracelet in hands and earring complete his ‘Bhai look’.

Overall, it was a nice episode that moved at a fast pace. The only thing I didn’t like was that  unnecessary sunlight spotting during various scenes during the serial – whenever there was a sunlight the image  got blurred even hiding actor’s face and expression. I don’t know the technical reason behind but it was irritating me a lot.  The touching OST by Rahat Fateh Ali Khan served as great background score and helped in creating the right mood for the story.

I am looking forward to next episode to know how the story unfold.