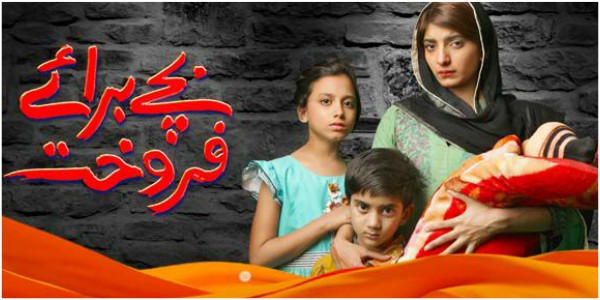 Urdu 1 latest offering, ‘Bachay Baraye Farokht’ is a heart-wrenching tale of a helpless mother. Exposing harsh realities of life it shows that it is not easy to survive without money in this materialistic world – and situations sometimes become so tough that you have to sacrifice your dearest assets for a small piece of bread.

Produced by Fahad Mustafa and Dr Ali Kazmi it has been penned down by Farhad Qaim Khani and directed by Zahid Mehmoood. The ensemble cast included Mariam Ansari, Naveed Raza, Asad Zaman and Sohail Sameer.

In Pakistan making soap opera isn’t a lucrative business as most of the engrossing scripts are often gets ignored for not  airing at prime time. We wish it doesn’t happen with ‘Bachay Baraye Farokht’ as it is based on a sensitive topic that needs to be addressed.

Based on true incident ‘Bachay Baraye Farokht’ actually narrates a problem of a helpless mother who has been forced to sell her lovable kids.

Dr Ali Kazmi got the idea to make a drama on such a sensitive topic when he saw a poor man sitting outside a press club with a placard in hands, intending to sell his kids as he doesn’t have money to provide them basic necessities of life. It wasn’t a fake attempt to get attention, the man was, indeed, in dire need of money and he doesn’t have option but to ‘sell kids’. According to a latest survey, 60 percent Pakistani are living below the poverty line. This situation is really alarming and it’s high time our government should take steps to control it.

Urdu 1’s soap opera, ‘Bachay Baraye Farokht’ is an eye-opener and has exposed the bitter reality of the society.  The story belongs to a middle-class family that has its own shares of pain and sorrows. Just like most of our soap-operas the leading lady is a victim here. Sameer Sohail has shown as a sole bread earner of the family but despite of it, his wife (Mariam Ansari) is on the hit list of his mother and sister. Another important character in the drama has been played by Naveed Raza as a jobless brother of Sameer Sohail.

Two episodes down, and no big twist has surprised audience. It has a typical mother-in-law and just like many other cunning saas of our drama she is also in habit of telling tons of lies. In order to get her younger son marry off in a reputed family she lies about her jobless beta –  bahu begum  doesn’t like it and opposes the idea which leads to serious conflict  between the two. So far the drama is moving on a familiar run-of-the-mill soap opera formula and we are anxiously waiting for the big twist which will take the story forward.

What lead the poor mother to sell her kids? How society would reacts to her decision? What impact does it leave on kids? To know this and more keep watching ‘Bachay Baraye Farokht’ every Monday to Friday at 7:00pm only on Urdu 1