Miss DramaticSpice up your life with showbiz tadka.
Home celeb scoop Everything you need to know about Mawra Hocane’s Sammi
celeb scoopDrama Reviews

Everything you need to know about Mawra Hocane’s Sammi 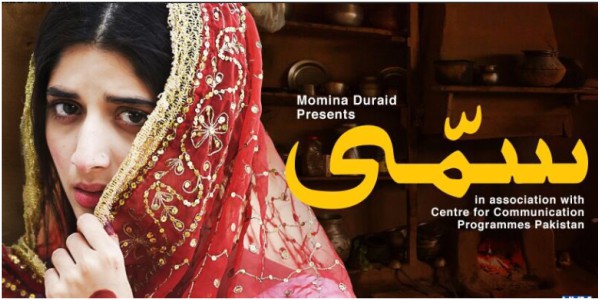 Mawra Hocane latest drama serial, Sammi, has all right ingredients to be the next big hit on small screen. Highlighting bad traditional practices of the society, it is an engrossing project that has potential to hook audience from the very first episode.

A press conference was recently held giving sneak peak to the drama where cast and crew shared their experiences of getting associated with project. It is not only about “Vani”

Judging from promos many viewers anticipate that the drama only highlights the heinous practice of ‘Vani’ but actually it also addresses other important issues including the ignorance of maternal and child healthcare and female inheritance laws.

Talking about drama, President Hum Network Sultan Siddiqui , said it showed the dark but the real side of our society.

“Staying away from glamour we have tried to present a story that needs your attention,” she said.

Sammi is the journey of different female characters who rise above traditional and social barriers and find within them the courage to claim their rights and end their silent suffering.

After several successful plays, Angoori, Marvi, Bebak, Jhumka Jaan and Des Pardes, Noor-Ul-Huda Shah is back with another poignant story.

The writer told media that while writing Sammi her excitement level was as high as jotting down script of Jungle years ago.

“When I wrote Jungle, back in 80s, I thought the society was really backward and they needed to jolted down from deep slumber but today the situation is even worst and we are socially and morally far behind than our ancestors,” she stated. Noor-ul-Huda Shah wrote Sammi for the so claimed ‘ghaeratddar bhai’ of nation.

“My message is for brothers who considers their sisters as their property and deprived them of their basic rights, she said.

‘Sammi’ is a hope for thousands of young girls living in villages, Mawra Hocane

The drama lead actress, Mawra Hocane said they made a small effort to change the system by addressing serious issues in Sammi.

“While studying at good colleges and travelling abroad we often forgot about girls who suffers in villages,” she said. She added projects like Sammi were actually a ray of hope for many girls.

“If Sammi  gives only one percent hope to poor girls than  I am ready to do 10 more shows like it to fix this problem,” she said.

Although both new actors didn’t attend the press conference due to their prior commitments but their leading lady in drama, Mawra Hocane, shared her experience working with them.

“In most of my dramas I have been cast opposite actors who are older than me. Luckily, in Sammi, I have got a chance to work with some new talent. It was so much fun working with boys and since it’s their debut project they were super-enthusiastic about it – and it was good to get that positive vibe from them,” she said Adnan Siddiqui in an unseen avatar

When asked if there would be any resemblance in Adnan Siddiqui’s character in Sammi to Ahsan Khan’s role in Udaari, the producer Momina Duraid said they were poles apart.

“If Imtaiz was cunning and shrewd, Farook would be entirely opposite to it – he hardly uttered any word and blindly follow his elder brother,” she added.

Mawra Hocane’s elder sister, Urwa Hocane recently ended drama has created quite a stir and it was the super hit drama of the last year.

Mawra stated that Udaari hangover would not die soon.

“It’s been a long time since Udaari ended but its hangover is still there, in fact it is getting stronger everyday – and if somehow it helps us getting good ratings for our show than it’s marvelous,” she stated.