Miss DramaticSpice up your life with showbiz tadka.
Home Drama Reviews Will egoistic Sadaf pay the price for greedy nature in ‘Be Aib’?
Drama Reviews

Will egoistic Sadaf pay the price for greedy nature in ‘Be Aib’? 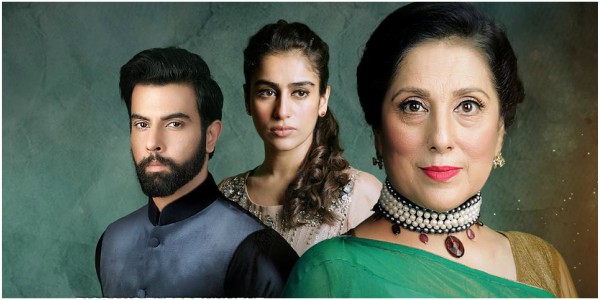 Urdu 1’s latest drama serial, ‘Be Aib’, written by Qaisera Hayat and directed by Ali Hassan has opened its account last week with Samina Peerzada garnering all attention as a self-centered Sadaf.

The veteran actress dominates the first episode of Be Aib with an apt portrayal of what we called ‘begum’ of elite class – the one who likes to flaunt her daulat with mehngaye kapre aur qeemti zewarat.

Considering herself as Miss Perfectionist she likes to dictate the lives of people around her – be it her obedient daughter, Tooba (Alishba Yousuf) or sharif husband, Sarmad (Sheriyar Zaidi). Apparently, Sadaf’s life is happy and complete without any ‘Aib’(fault) but as said all that glitter is not gold, the superficial attraction of this greedy woman will also fade out with time and eventually she has to pay for her gluttonous behavior.

The not-so-happy part of drama serial is Safi Sahib’s life – he is Shahana and Sadaf’s younger brother. Belonging to middle-class strata of society, Safi doesn’t enjoy a reputable status in the eyes of his greedy sister, Sadaf.  She never leaves a chance to humiliate him for his middle-class thinking and simple lifestyle.

Safi’s life revolves around his lovely daughter Anaya (Marium Ansari), caring son Ali (Imran Aslam) and always nagging wife (Nida Mumtaz).  Besides gharibi, this family has another ‘aib’ – and it is the ugly black scar on the face of Anaya..

Although Be Aib’s plot appears familiar focusing on a tussle between rich and poor but it is Samina Peerzada ‘s awesome act which force viewers to glue to their television screens. From lashkarye marte huaye kapre to her teez aur tarar zuban she portrays egoistic Sadaf with ease and perfection. While her taunting words leave his brother feel awkward at times, her pompous attitude is quite acceptable for her daughter who looks up to as a source of inspiration.

Coming to junior actors, Alishbha Yousuf has made a solid comeback as docile Tooba who was under the great influence of her mother. Apart from acting, I personally liked her chic wardrobe which complemented her character really well. I also have a lot of expectation from the young actress Marium Ansari as she has an important role to play in the serial. I don’t know why but after seeing her scared face in Be Aib, the first thing that came to mind is Zeenat Aman of Satyam Shivam Sundaram. The yesteryear actress, Zeenat Aman, made the scared face of goan ke gori looked glamorous in the film and if Marium Ansari plays her cards well she can also turn it into one of her memorable play. I believe that in this drama she has finally got a chance to come out of her happy-go-lucky supportive roles and do something prominent and challenging.

Among the boys, I am looking forward to see Noor Hasan and Imran Aslam characters grow and do something commendable too.

As the drama serial has been produced by Big Bang Entertainment, the good aesthetic sense of art team quite evident in every shot – I loved the delicious fruit table they shown in the serial it looked so tempting and refreshing.

The writer has brilliantly introduced all character in a 40-minutes long first episode and I hope that the play will hold our attention by introducing new turns soon.  As I am signing off, I must say Urdu 1 has once again done a brilliant job by airing a show like ‘Be Aib’ as it is different than the usual saas-bahu dilemma and presents a story about a greedy woman who will eventually have to face the music for her selfishness.

If you haven’t watched the drama serial yet, then tune into Urdu 1 every Thursday at 8:00pm.