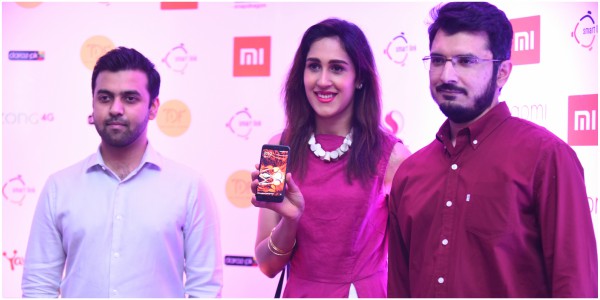 With the launch of Redmi 4X, Xiaomi demonstrates its commitment to the market

One of the world’s leading technology company Xiaomi launches Redmi 4X in Pakistan on Saturday through distribution partner SmartLink Technology. The launch event took place in Lahore on Friday and was hosted by none other than the witty Taimur Salahuddin AKA Mooroo.

Audiences were provided double dose of entertainment with the hilarious jokes of Mooroo and scintillating performances by Pakistan’s leading band Noori and Nescafe Basement band with Altamash Sarver who made audiences dance to their favourite tracks. The stunning Mira Sethi also made a special guest appearance who was all praises for the newly launched Smartphone, equipped with the latest technology in an affordable price. Smartlink Technologies Marketing Director Ahmed Butt claimed that the new ‘Redmi 4X to be a hit within its own price market.

“Majority of the Pakistani consumers prefer to purchase smartphones remaining in this price bracket and thus this bracket has always remained a key market for all brands. We have confidence that Redmi 4X will be a hit within its own price bracket, as the smartphone surely outperforms its competition in the market.” Redmi 4X features a full metal body, is the slimmest in design at just 8.65mm of thickness and weighs a mere 150g. Equipped with a 4100mAh battery, Redmi 4X has an impressive standby time of up to 18 days! Bid those dying battery issues adieu! It will be available with a 3GB RAM and 32GB storage, so users can multi-task more efficiently, having more space for their downloaded applications and images. Redmi 4X will be available in the markets from Saturday in black a price of Rs 18,900. The smartphones will be available offline across the country and online at official mistore.pk and at authorised online sales agents including Daraz.pk and Yayvo.com.

Every Redmi 4X will ship with MIUI 8 which builds in several technology breakthroughs such as being able to clone apps and manage multiple accounts on the same phone. This means that users can have two instances of a messaging app on the same phone that correspond to different accounts, removing the inconvenience of having to log in and out on the same app. With MIUI 8, users can also split their smartphones into two accounts. This means that a different password or fingerprint can allow you to access a different home screen entirely, with independent apps and data. According to their needs, users can choose to merge certain data such as the address book and their call log history.

Xiaomi was founded in 2010 by serial entrepreneur Lei Jun based on the vision “innovation for everyone”. We believe that high-quality products built with cutting edge technology should be made accessible to everyone. We create remarkable hardware, software, and internet services for and with the help of our Mi fans. We incorporate their feedback into our product range, which currently includes Mi and Redmi smartphones, Mi TVs and set-top boxes, Mi routers, and Mi Ecosystem products including smart home products, wearables and other accessories. With more than 70 million handsets sold in 2015, Xiaomi is expanding its footprint across the world to become a global brand.

Established in 2016, Smartlink Technologies is a brainchild of a pool of professionals whose strong vision and even stronger conviction paved the way for an exclusive partnership with Xiaomi.We believe in reaching out to both the low-end and the high-end consumers and still give out state-of-the-art and warranted products at the best possible prices.We live in an age where the digital world meanders from smartphones to smart everything – we see it all around us.Smartlink Technologies strives to connect latest technology with modern and innovative sales techniques to change not only how brands are marketed but also how they define themselves.