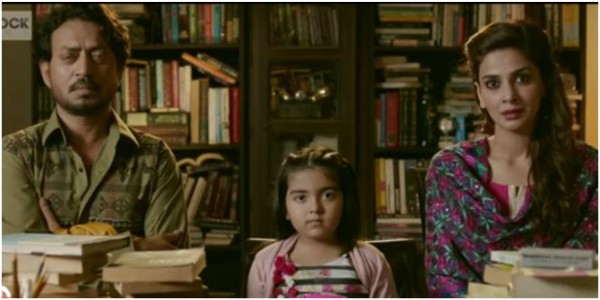 The trailer of Saba Qamar much-awaited Bollywood flick, Hindi Medium is out and she nailed it in a super amazing act.

Directed by Saket Chaudhry, the film is a narration of struggle of a middle-class couple and their desire to move into upper crust of the society.

The reality-based trailer wonderfully depicts the difficulties parents face to get their kids admission in English medium school. The veteran actor, Irrfan Khan, has played a illiterate but highly concerned father where as Saba Qamar plays his educated wife in the movie.

The wonderful chemistry between Qamar and Khan has been the highlight of the trailer. Bhangra sensation Sukhbir Singh and Pakistani rock star Atif Aslam have done special numbers for the film.

After watching the super-entertaining trailer of Hindi Medium we really can’t wait to see it on silver screen. The film is expected to release on May 12.