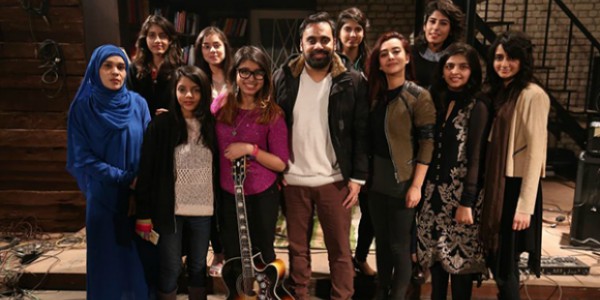 They are cool, they are awesome and they’re unstoppable – the girls’ gang of Nescafe Basement 4 is an inspiration for all those girls who want to make big in music.

The fourth edition of Nescafe Basement has just kicked off – and for me so far the highlight of the show is power-packed performances of girls’ band on the cover of John Newman’s song, ‘Love Me Again’. Even the international singer was speechless on the beautiful rendition of the popular song and took to Twitter to share his response.

https://t.co/jPUx1SMHg5 THIS IS SOOO DOPE! THANKYOU!!

In the history of Pakistani music, it was the first time when a girls’ band performed without any male fellow – and they indeed did a great job both at vocals and instruments. From the drummer, table player, violinist to singer all brought an incredible energy to the show with their impeccable act. Their work was edgy, melodious and inspiration.

As the true epitome of modern Pakistan, these young girls are battling prejudice and challenging social norms to carve a niche for themselves. From singing the song to beautifully playing the guitar and beating the drums they did all to prove that music is not just a man’s passion and they equally deserve to take command in hands. Kudos to Nescafe Basement team for providing a platform for young female performers to show off their talent. Under the amazing supervision of Zulfiqar Jabbar Khan aka Xulfi, the girls rocked the floor with their tremendous energy – he was the guiding source who took the initiative to demonstrate girls’ power in this male-dominated society.  Check out their amazing performance here.