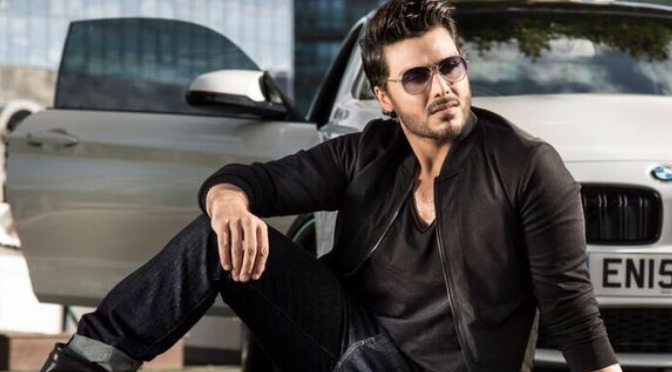 The prolific star Ahsan Khan, a British born Pakistani, has been among the rare breed of artists who has made name in the industry with sheer hard work and dedication.

Khan’s foray into showbiz is nothing short of a fairy tale. Hailing from a non-filmy background he entered showbiz by luck.The doe-eyed actor became ‘darling of filmmakers’ sincehis debut in Sangeeta’s Nikkah. The industry welcomed him instantly as he was the fresh addition with novice looks and star appeal among the lot of traditional muscular heroes.

After giving back to back hits on silver screen he shifted his attention towards television making Karachi as his home base. The multifaceted actor proved his versatility on small screen too by opting for several challenging roles. He has never limit himself to sweet romantic heroimage rather preferred thought-provokingscripts including Daastan, Bilquees Kaur, Mausam to Marasim. While people haveloved him as a supporting husband in Bilquees Kaur the hatred has been obvious in a negative role in Pani Jaisa Pyar.From a typical goan-wala, an elite boy to middle class struggler he has done variety of role in a career span of over a decade.

He has built an enviable career while successfully straddling various medium of entertainment – from acting, modeling, hosting to singing he has tried his hands on everything. Breaking the showbiz norms he has emerged as a great entertainer with several dhamakdar stage performances. A true trend-setter in every sense he has literally set the stage on fire with several thumping performances – be it LSA, Hum Awards or any other showbiz he has always been event organizersfirst choice when it comes to live performances.

Recently he has been approached by Indian leading showbiz network Zee Zindagi to do a special feature film based on a Sindhi folk tale of Moomal-Rano. The film will be shown in different festivals across the globe.

The recipient of several awards the actor recently earned award for his first ever regional production ‘Mar Jayen Tu Hum Kya’. He has plans to produce films too.

Khan has currently signed some good projects with top notch directors and producers of the industry. The artistic actor also have film offers from across the border.