HomeInterviewShaista Lodhi: 'I left morning show as I can’t lie with my...
Interview 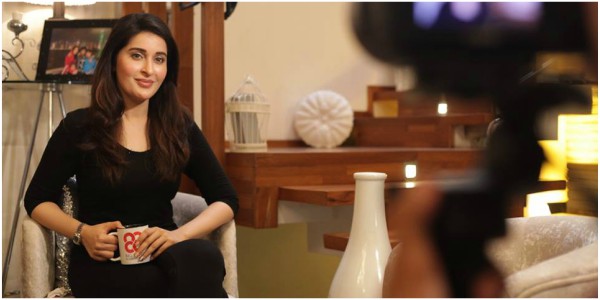 Directed by Syed Atif Hussain of Maryam fame, the drama stars Shaista Lodhi in a lead role. Her transition to small screen must be a pleasant surprise for her fans as they eagerly wait to see their favouite star ruling drama industry.

We have usually seen actors turning into hosts but in your case, it’s a vice versa. So what was the reason that you decided to take a plunge into acting?

Things do change in life and it also happens to me. I have been getting drama offers for quite some time but I don’t take them seriously because hosting has always been my priority.

Earlier, I signed two projects with big production houses but when the shoot was about to get started I again got hosting offer so I didn’t show up at the shoot.

When Fahad and Ali Kazmi came to me I was actually planning for a vacation. They showed me the script somehow convinced me to give my nod for this role. But some people say that your second tenure as a morning show wasn’t as successful as the first one and it might be the reason you decided to foray into acting?

This is absolutely wrong. I think my second tenure as a morning show was more successful because I could show the real side of me in it. Instead of following the rating race, I did shows on topics which were closer to me. Even if I did wedding week, it was with a social cause.

So why did you left morning show?

I left morning shows because I realized that I can’t lie with my audience anymore. On morning shows we often endorse things which mislead our audience. We tell them to get instant glow just by apply any fruit on their face or to shed kilos in days with a magical pill. I was kind of fed up with this culture so I decided to quit as a morning show host. What was the biggest challenge for you as an actor?

It was to follow a proper script and act like a pro. As a host, I have been tuned to be spontaneous and fast but to portray this I have to immerse myself into the role.

In the first few scenes, I didn’t do well as I was a little nervous. I was worried that what would happen if I disappointed my director and producer. With time I learnt to stay calm and focus on my work.

Tell us about your role in the drama?

I play a typical housewife. She is a little coward and relies on others to take decision for her. I maintained a traditional look for it with tied hair and no make-up.

Our dramas are already occupied with these bechari type women tales and now you are also joining this bandwagon. Why don’t you choose a role that shows you as a powerful and independent girl?

I could easily portray a woman who led a life on her terms but for my first project I wanted I do something which I had never done before. So I took it as a challenge to do a role which was entirely opposite to my real persona. What was the first scene that you recorded for this drama?

To make me comfortable in acting, the director gave me the easiest scene which featured my conversation with my husband on the phone and I asked him, ‘ghar kab ao  ge?’.

Do you watch Pakistani dramas?

You must have heard this famous saying, ‘first we make habits, then our habits make us’ – same goes with me. When I was hosting morning shows, my television wish list mostly included talk shows and current affairs programs. Now acting is my main concern, I have shifted my attention towards dramas.

I am planning to watch dramas and learn from other actors how they portray certain roles on screen.

Have you signed any more drama projects?

Not yet. I am actually waiting for Khawab Nagar to on air and once I get the feedback of my fans then only I’ll decide what to do next in my life.

Will you bid adieu to hosting now?

Hosting is my passion and I can never leave it. Whenever any good offer comes my way I’ll definitely consider it. How do you handle criticism?

The best way to deal with criticism is to change the approach and be positive about it. Whenever anyone says anything bad about me I try to take it as an advice. Instead of getting offense about it, I try to learn something from it.

What are your future plans?

I am planning to continue my studies and am doing a specialization in aesthetic medicine. I’ll open my clinic very soon.

Are you planning to venture into direction or production?

No, I don’t have any such plans. Most of my friends have turned producers and they all are doing a great job. I think it’s a huge responsibility and I don’t consider myself ready for it.