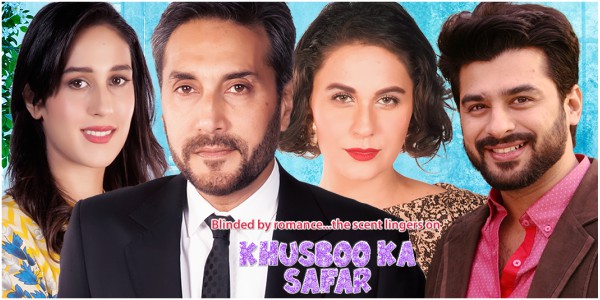 What will happen if you wake up one day and find out that the vision of your eyes has gone?

I am sure, your life will get upside down as vision is the most precious sense that God has bestowed upon us. TV One latest drama serial, ‘Khushboo Ka Safar’, is also about a guy whose life gets devastated when he lost his eye-sight in an accident. Starring Mira Sethi, Adnan Siddiqui and Nausheen Shah in leading roles, it has been penned down by Riffat Siraj and directed by Babar Qayyum. The first two episodes of the drama introduced the characters – and the main theme of the plot is yet to disclose.

Read: Will egoistic Sadaf pay the price for greedy nature in ‘Be Aib’?

Farheen is Talal’s family friend and is madly in love with him. Her parents also wants her to marry Talal but the guy has a different image of a life partner in mind. He considers Farheen as just a good friend and nothing more than it.  Talal’s family pressurizes him to settle down in life but he avoids to get trap in any new relationship.

On the other side, Riba gets a job in Talal’s office and she is slowly leaving her mark on him with her dignified persona and mature mannerism.  Talal’s closeness with Riba is a matter of serious concern for Farheen. At the first glance this drama looks like a clichéd love triangle but in reality the plot has different layers which will unfold with each passing episode.

The drama will take an interesting turn when Talal will lose his eye-sight and vanish without informing anyone. Taking advantage of the situation, Farheen will try to create misunderstanding between Riba and Talal.

Intelligent handling of script could be a saving grace

The script of ‘Khushboo Ka Safar’ could be its biggest strength. The veteran novelist Riffat Siraj doesn’t need any introduction and she has several successful plays at her credit including Shehr-e-Yaran and Dil Diya Dehleez. Even this play is based on a popular novel of the same title.

So far the writer has very intelligently introduce the main theme of the plot, i.e. blindness, through dialogues.

In the very first scene of the drama Riba has shown in a social welfare house for blinds where she comes to learn Braille.

In another scene, Talal is having a conversation with a friend in a gym where his friend tells him that he recently returns from interior Sindh where they set up a camp for visually-impaired kids.  He also tells him that the deficiency of Vitamin A causes blindness in kids. This is not the first time that any drama has touched this topic of early blindness and it’s impacts on individual’s life. Ashfaq Ahmed’s cult play, Qurat-ul-Ain was aired in PTV’s popular drama series, Ek Mohabbat So Afsanay – and it was also about a young guy who lost his vision and he too vanish somewhere without informing anyone.

It seems that Riffat Siraj’s Khushboo Ka Safar has taken inspiration from Qurat-ul-Ain but it will prove only when the drama progress and it’s too early to comment anything. So far, the drama is moving with a slow narration.

One thing that I don’t like about the play is casting – Adnan Siddiqui although doing his role with ease but this role is not age-appropriate to him. In fact Semi Pasha doesn’t look like his mom at all. Same goes with Naila Jaffery – she plays Nausheen Shah’s mother and looks only a few years older than her.

Fortunately, Mira Sethi is aptly cast for the role – Riba is sweet, confident and mature girl and Sethi has done it with aplomb.

Nausheen Shah’s character nuances are yet to unfold – so far she has come across as Riba’s best buddy but her stubborn nature becomes evident when she tells her mom that she will not let any other woman enter in Talal’s life.

The yesteryear actress, Nishoo Begum, has also made her comeback on television in this serial. She plays Riba’s mom – and there is no need to say that the veteran actress is doing a superb job as a concerned mother. Another important track of the drama revolves around Tausif played by Humayun Ashraf. He plays Riba’s cousin in the drama serial and he also have special feelings for her. Humayun Ashraf is not there just as a supporting cast, in fact, some mystery is also attached with his character. Riba’s mom indicates towards it when she shows her concerns about keeping Tausif safe from Zeeshan. The identity of Zeeshan and how he is  dangerous for Tausif is yet to disclose.

So far the drama hasn’t offered anything new and we hope that the coming episodes will hold viewers attention with new turns and twists.

If you haven’t watch ‘Khushboo Ka Safar’ tune into TV One every Wednesday at 8pm.