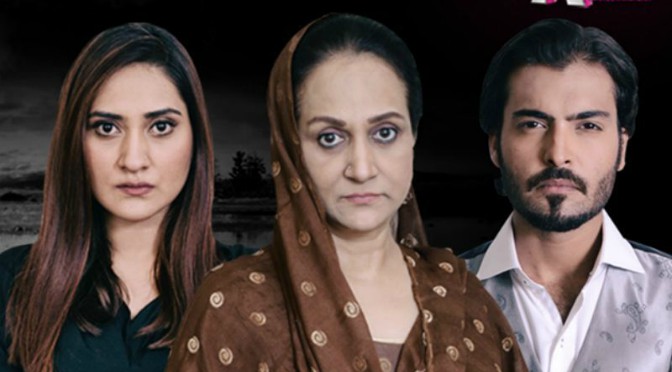 Bushra Ansari as Istikhara bibi of ‘Khuda Dekh Raha Hai’ continues to manipulate people’s emotions in the second episode – in the disguise of seeking God’s help, she is indeed fulfilling her financial needs.

Although most of her verdicts are not in accordance with devotees’ will but it doesn’t stop them paying a visit to their ‘pious bibi’. In the latest episode two devotees came with their kids’ marriage invitation (of which she has earlier given approval of) but to their surprise, her decision was totally changed now.

And the solution she offered was, even more, shocking when she told bride’s mom to marry her another daughter with the groom.

But than ‘bura aseeb’ suddenly became less harmful when the devotee gave her a handful of money which Khalida happily accepted.

The talented Bushra Ansari has once again proved her acting prowess with her natural act – and credit definitely goes to the script writer for jotting down the scenes depicting mischievous nature of such fraud ‘peers’.

When devotees send gifts and sweets to Khalida Bibi she justified it that it was their way of showing affection to her.

If Khalida’s ‘peer faqiri‘ was giving her bucks it was her kids who were not following her commands at all – although she visited Sanam’s house to seek her son’s marriage proposal but she didn’t like her at all. Her bold and independent attitude was unacceptable for Khalida.

On the other hand Zoya and Junaid’s love story flourished in the full boom and two often met outside the home.

So far ‘Khuda Dekha Raha Hai’ has proved to be a good watch and it has managed to grab audience’s attention with intriguing plot and brilliant performances.