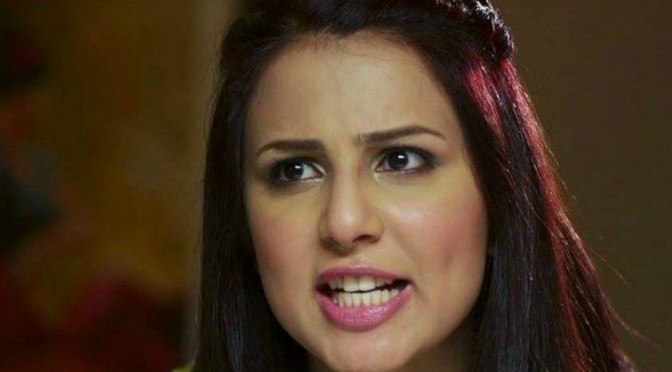 Seven episodes in and Ushna Shah’s character in the sweetly titled ‘Piya Mann Bhaye’ is giving us the heebyjeebies (and in case you are wondering, the drama has nothing to do with Indian classic ‘Dulhan Wahi Jo Piya Mann Bhaye’). Instead it’s a story of four people, Haniya, Mantasha, Zawaar and Sheher and their commitments towards their married lives.

Before getting into the details of her character let me give you a quick recap of whatever has been happened so far.

The play revolves around the lives of Kamal Sahib’s three daughters, Mantasha, Haniya and Abeeha. The first episode begins with the news of a foreign returned Zawaar’s marriage proposal for Kamal Sahib’s elder daughter Mantasha – the middle class family did everything to impress the guest.

When Zawaar met Mantasha he immediately fall for her but his mom Shaista Begum found her conservative and liked younger sister Haniya who appeared to be more outgoing compared to her sister. Shaista Begum thought Haniya would easily get fit into their elite social circle and forced her son to marry her instead of Mantasha.

Meanwhile, Haniya also tricked her parents into thinking Matasha was not interested in the rishta.

The drama moves at a fast pace – so soon Haniya who is impressed with Zawaar’s rich background is married to him. But apparently the love of her husband and his wealth are not enough for Haniya and she starts having an affair with her ex-beau Shaheer Sikander – a filthy rich guy with a shady background.

The story took a turn when the materialistic Haniya forced Shaheer to marry her sister so that they could carry on with their affair and nobody would say anything to them. Shaheer while completely blind in Haniya’s love accepted to marry Mantasha whereas the poor girl also accepted the proposal seeing her father ill health.The coming episodes of Piya Mann Bhaye will reveal what Mantasha and Zawaar do to save their marriages whereas Haniya and Shehreer scheming minds would also weave ways to let their love affair grow.

Shah has left behind the innocent Rudabah of Bashar Momin to fit in the role of a bitchy Haniya who values money more than human emotions and relationships. She doesn’t mind going to any length to achieve her materialistic goals – and even if it is at the cost of losing one of her family members.

While her father was struggling between life and death and was admitted to hospital in critical condition the cold nature Haniya was partying with her ex-beau in the club.

The egocentric girl won’t mind destroying her sister’s life just to attain her personal goals. The moment she knew that Shaista Begum was interested in sending her proposal she started pressuring Mantsha to back off.

When Zawaar asked Haniya about her relationship with Shaheer she said she has found him as a suitor for Mantasha. Even Shaheer went crazy knowing she had said but the cunning Haniya somehow convinced him to support her in that lie.

Haniya of ‘Piya Mann Bhaye’ versus Saman of ‘Maat’

Haniya’s character in ‘Piya Mann Bhaye’ is somewhat similar to Saman (Saba Qamar) of Hum TV popular’s play Maat. Even the storyline also has striking similarities. In Hum TV’s play the materialistic Saman steal her sister’s fiance and in Piya Mann Bhaye Haniya did the same with her sister. Both the ladies are shown as cold nature avaricious beings who put their worldy needs before everything else – no matter even if it at the cost of hurting their loved ones.

But in terms of acting, the multifaceted Qamar definitely has a lead over the pretty Shah. Qamar’s performance in Maat was the highlight of the play as it forced the viewers to hooked to the channel whereas Shah badly fails in portraying her role on-screen. Her immature act coupled with confused facial expressions are doing serious damage to the drama.

After giving a weak performance in Bashar Momin it would have been a great chance for Shah to establish herself as a good actor in a negative role but unfortunately so far she isn’t successful to shine well into it. Her character demands her to have haughty body language with expressions depicting her feelings but her efforts to look cute and innocent in cunning bitch role is kind of creating her confused image in the mind of viewers.

We hope in the coming episodes her role became more evident and she’ll add life to it with good performance.