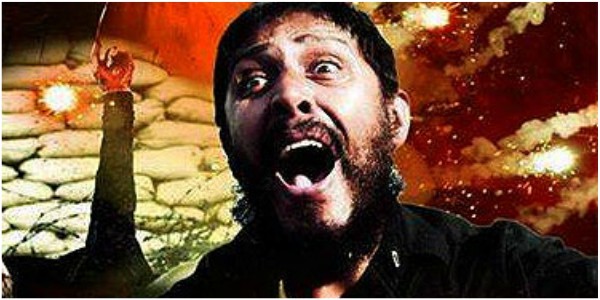 Before going to the premier of Hashim Nadeem recently released film, Abdullah, the only thing I knew about it was that it featured Khuda Aur Mohabbat beautiful couple Imran Abbas and Sadia Khan – and once I left cinema the only thing left in mind was that the film belonged to only one person and it was none other than the ace actor Hameed Sheikh. From the beginning till end I couldn’t come out of the mesmerizing aura the brilliant actor created with his incredible act. He gracefully carried the entire film on his shoulder and outshined fellow actors with a wonderful performance.

Based on true incidents, Abdulllah was a story of a man who was under the guilt of telling a lie in an important judicial matter. Two Russians and three Tajiks, alleged suiciders, were murdered at the check post by the Frontier cops – Abdullah (Hammed Sheikh) was the only eye-witness of the incident. What made Abdullah to tell a lie in front of judicial commission? What were the circumstances that force him zipped up his mouth and hide truth from the world? How he overcome this guilt? To know about this you have to watch the film in cinemas.

For now I can only tell you it has been the most engrossing film released so far this year. Exposing the corrupt police culture, it gives a strong message of telling truth no matter what will be the consequences.

As I just told you, Hameed Sheikh was the star of the film. He aptly portrayed the pain, agony and depression a person faced while hiding away from the reality. The director did a tremendous job in the impeccable depiction of conflict which went off in one’s conscience to decide between right and wrong. Targeting to cult audience, the film is a good attempt at realistic cinema. The crisp editing and striking cinematography further added charm to the interesting story. Kudos to DOP Saleem Dad, Melcome & Liaqat for making the film a visual delight – Quetta has not looked so beautiful before.

Newbie Habib Panizai – playing Abdullah’s truck conductor he entertained us with his interesting one-liners and punches. Apart from Abdullah’s intense tale, a sweet romantic story of Imran Abbas and Sadia was also incorporated in the script satisfying the commercial need of the cinema. Unfortunately, both stars failed to leave a mark – their love story lacked the passion and chemistry between the two was really off.

Movies based on real incidents at times look preachy with its moralistic script but Abdullah is different with simple but effective dialogues reaching the heart. The scene where Maulana sb telling the significance of truth was so convincing that you divulge

There weren’t too many songs in the film – the film OST, Maula Karam sung by Shehreyar Raza aka Sherry of Pak Ramadan fame lift the inspirational lyrics with his powerful vocals. Literally, I was surprised to hear Sherry taking such high notes and doing justice with it. The romantic number in the film was sung by some anonymous singer, titled as Meri Pak Mohabbat. While most people find it irritating, the song just stuck in mind with its traditional vocals and Phusto sound. The first thing I did after returning from cinema was to look out for it on internet but unfortunately I couldn’t find it.

Overall, it was a good movie but again if you are looking for dazzling item numbers and masala entertainment then this film is not for you.