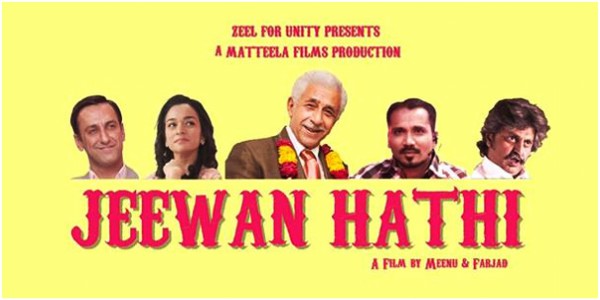 “I can’t tolerate this crap anymore and am going for shopping downstairs,” said a girl sitting next to me in cinema after watching ‘Jeewan Hathi’ only for 15 minutes. Later, while telling my husband about her I recalled her as a ‘bold girl,’ as, at least, she showed courage to walk out which, obviously, I didn’t have at that time.

As an ardent fan of the dynamic duo, Hina Dilpazeer, and Fasih Bari Khan I went for ‘Jeewan Hathi’ premiere with high hopes but returned home in despair. Directed by Farjad Nabi and Meenu Gaur of ‘Zinda Bhaag’ fame, the film didn’t have anything to entice viewers.

Expected to be a black comedy, the film was a weak attempt to show media’s obsession with ratings that turned out to be a tasteless adult humor sans any engrossing plot.

The film opened with India returned chota-blouse-magar-bade-gal- wale gharib housewife who spends her day watching the saas bahu sagas and morning show divas. She lives with her husband in a lower middle class locality.

In a hope of winning a big LED TV she participates in a bizarre show,’ Jeewan Hathi – Kasuti Rishton ke’. The show is hosted by a rejected over-aged former morning show host, played by Hina Dilpazeer. The apparently sophisticated looking couple, a rich businessman, Adnan Jaffar and his materialistic wife, Samiya Mumtaz, also participate in the show. In a desperate attempt to earn record-breaking ratings, the host ridicules guests in a weirdest possible way.

Hina Dilpazeer’s over the top act and a weak script further ruined by below average direction is not what we expected from ‘Jeewan Hathi’. From showing the unnecessary low grade intimate scenes to indulge in superficial conversation, the film makers used every masala gimmicks to win hearts but all their effort goes in vain.

Made under the banner of Zee Unity project, the film, by far, has been the weakest act put together by Hina Dilpazeer and Fasih Bari Khan. The cameo of India star, Naseeruddin Shah has also got wasted with his insignificant presence in a scene or two. Do you remembered Professor Rasai (Satish Shah) of Shahrukh Khan starrer, Mein Hoon Na’, who talks less and spits more,  Naseeruddin is exactly doing the same here. Among the young actors, Kiran Tabir and Fawad Khan has shown a promising act staying true to their roles.

I’ll end my review by sharing another media friend comment on the film. She came out of the cinema saying, “yr is mein hasna kahan tha ur rona kahan per tha?”