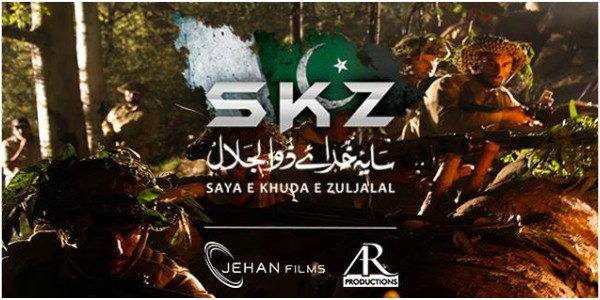 I must admit that it was a brilliant concept to show on silver screen the sacrifices our ancestors made to get independence from Hindus.  Unfortunately, the efforts didn’t translate well on big screen in Saya Khuda-e-Zuljalal (SKZ), saddled with weak script and average performances it turned out to be a major let down.

Written by former doctor of Pakistan cricket board, Mohammad Tauseef the film has been directed by Umair Fazli. With the multi star cast, patriotic theme and big budget the film has been expecting to be the next big hit of the year – alas, it hasn’t been the case. The film loses zing in its telling and the story doesn’t have any depth. In an effort to show the struggle of our brave warriors of 1965 battle, the writer forgets to pay attention to the detailing of other characters which eventually leads to a superficial attempt.

The film was based on true incidents but instead of intriguing audience with realistic approach it had too many loopholes. If Razia Sultana (Rachel Gill) had to provide all the evidences against corrupt politicians, then why we need a tough cop (Moammar Rana) in the story.  I also didn’t get how Major Faraz’s friend came to know that Haider was innocent and the conspiracy was staged upon him. In the subplot, the conversation between Muhammad Ali Jinnah and Ghandi was appeared to be forcefully infused in the script. Umer Sultan was standing and talking like Amitabh Bachchan than our great Quaid-e-Azam.

Seasoned actors including Javed Sheikh, Firdous Jamal, Shafqat Cheema and Nayyar Ejaz tried to save the sinking tank with their promising acts but the illogical script maligned their efforts.

Noor Bukhari has done a decent job as a crime reporter, Rachel Gill. Jia Ali and Nimra Khan’s presence in the film were totally wasted.  Moammar Rana could be the soul of the film with main track revolving around him – but he failed to engage audience by delivering yet another average act.

However, the film has its moments: the most amazing was when Noman Ejaz as a young soldier saved the national flag touching the floor. Another one when Arbaaz Khan as a Shahbaz Shairf had one-on-one fight with Indian soldier. In fact, cameo appearances of all stars was note-worthy including Asad Malik, Rambo and Kamran Mujahaid.

The guy, Essa Chaudhry, who played young SP Haider had a spark and if groomed properly he could turned into a valuable asset like Shaz Khan of Moor.

The well-executed action sequences were another highlight of the film with our heroes kicking the butt of enemies with vigour and technique.

Overall, it is a one-time watch with its high on value patriotic theme. Go watch it if you want to see the tough time the country faced during 1965 war.