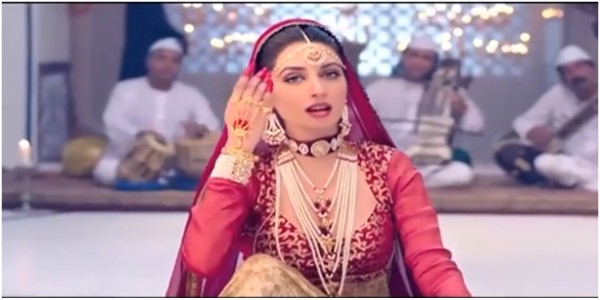 As expected the radiant Iman Ali steals the limelight in the recently released video of Mah-e-Mir first song, ‘Uska Kharam‘.

Iman Ali as a the beautiful courtesan dominates the screen – even our favourite Fahad Mustafa as Mir Taqi Mir and Ally Khan can’t get their eyes off her.  Dressed in red traditional anarkali attire she looks picturesque and drop dead gorgeous. The actress exudes radiance while portraying a royal courtesan in the period film.

Beautifully composition by Vital Signs ex-member Shahi Hasan, the song represents class and elegance of the bygone era. He has brilliantly incorporated classical ragas with magnificent orchestration to set the mood for the great sound.  The soothing female vocals leave a lasting impression forcing listeners to play it again and again.

Written by Sarmad Sehbai and directed by Anjum Shehzad, Mah-e-Mir is produced by Sahir Rasheed, Badar Ikram and Khurram Rana. The film, which will be distributed nationwide by HUM Films and Eveready Group of Companies is a story that follows the struggles of a contemporary poet and draws parallels with the life of Mir Taqi Mir.

The stellar cast boasts Fahad Mustafa in his most challenging role to date as Jamal/Mir, the male protagonist, with Iman Ali in the role of the lead female protagonist. The talented Manzar Sehbai, Sanam Saeed and Ally Khan are also part of the ensemble cast.