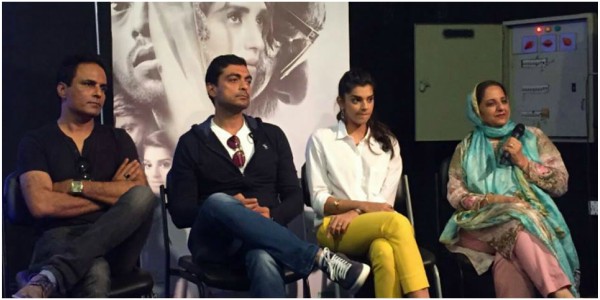 Mah-e-Mir cast has left no stone unturned to pull the crowd to theatres on May 6 through genius marketing of the film. From campus drive, appearances at morning shows, to live chat with fans on social media they are doing everything to create the right buzz about the film.

The promotional campaign initiated with music launched in Karachi and Dubai. Journalists and bloggers also got a chance to have a detailed rendezvous with the cast and crew to spread the word about the film.

In the second phase the film lead actor Fahad Mustafa had an interesting live chat on social media where his quirky response to fans twisted questions amused all and sundry.

Fahad Mustafa also went to the sets of Hum TV’s morning show Jago Pakistan Jago – from where he started his career as a morning show host. Besides chit chatting with the audience, Mustafa also took selfies with the little girls on the show.

Mah-e-Mir cast next stop was IQRA University where once again Anjum Shehzad and Fahad Mustafa gave a brief about the movie and how they presented a struggle of a contemporary poet and drew parallel with the events of legendary poet Mir Taqi Mir’s life.

At the university campus, students took selfies with the star whereas the theatrical arm of Starlinks PR Agency performed on the funny skits as romantic poets. (Video courtesy: Bizmax TV)

Fahad Mustafa, Aly Khan, Sanam Saeed and Anjum Shehzad also made a dazzling appearance at Sitaray Ki Subha – while we badly miss the leading lady Iman Ali among them it was a real fun watching the other actors talking about their roles.

We loved this chic and casual look of Sanam Saeed with white tucked-in shirt and yellow jeans.

Finally, the cast headed to Indus University where once again they had a hectic day meeting their fans and taking selfies with them.

Mah-e-Mir cast last stop was SZABIST university where once again they not only talked about the film but had a fun interaction with the students who were eager to know about the glitzy life of their favorite stars. (Video courtesy: Bizmax TV

So finally a hectic day came to an end with the vigorous promotional activities and we wish the cast all the best for all their endeavours.