Miss DramaticSpice up your life with showbiz tadka.
Home Drama Reviews 'Dumpukht' is a brilliant depiction of peer-fakiri culture in Pakistan
Drama Reviews

‘Dumpukht’ is a brilliant depiction of peer-fakiri culture in Pakistan 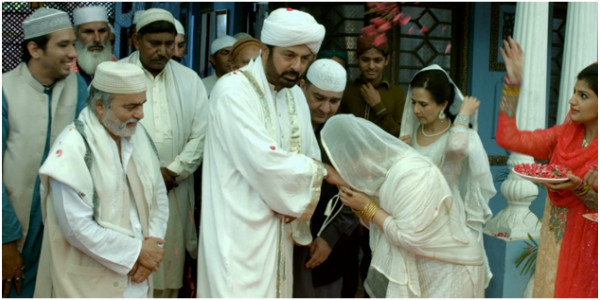 Dumpukht is an old slow oven cooking technique practiced in Awadh region of India but Zafar Mairaj aptly used it as a title of his currently on-aired drama serial about a life of a spiritual peer who is burning in the fire of his love.

Amid the run-of-the-mill saas-bahu saga and extra marital affairs, Dumpkhut- Aatish-e-Ishq is a pleasant relief with a reality-based story hitting on the existence of peer-fakiri culture in Pakistan.

I must say that it needs serious guts to pick up such a sensitive topic and delivers it with perfection – but the dynamic duo of Zafar Mairaj and Kashif Nisar are a pro at it as they have proved in the past with several award-wining plays at their credits including Sangat, Ullu Baraye Farokht Nahin, and Ashk.

The story so far

It is a story of childhood lovers, Kulsoom (Sonia Mishaal) and Billu (Bilal Abbas). Although they live in same neighborhood but their families are poles apart due to difference religious beliefs. Kulsoom’s family is an ardent follower of Peer Habibullah and believes in nazar-o-niyaz. Bilal, is the only child of Meher Nigar (Saba Faisal) and he lives with his father, away from his mother.

As Mehr Nigar yearns for Billu’s return, her student Kulsoom feels miserable seeing the saddened state of her teacher. She gets a taweez for Bilal’s return from peer Habibullah and hides in the cupboard.

The taweez serves as magical wand and Bilal returns – but not for his mother, in fact, it is his love for Kulsoom that brings him back. Kulsoom loves him too, but is also well aware of her conservative family’s rigid principles. She again goes to Habibullah’s wife to get a taweez to develop hatred in the heart of Bilal for her but this time Bibi Sahib doesn’t give him what she wants, instead start making efforts for milap of Kulsoom and Billu. She also forces peer sahib to get involved in it and help the girl find her true love. Peer Sahib’s intervention help in convincing Kulsoom’s family for this proposal but her mother doesn’t accepted this proposal and keep creating hurdles in the process of match-making.

On the other hand, Saba while seeing his son interest in Kulsoom, agrees to take a baith on the hands of Peer Habibullah. She arranges a mehfil-e-milad at her home and invites Peer Habibullah and his wife too.

The major twist in the drama comes with Peer Habibullah first interaction with Kulsoom. He is astonished to see her as she reminds him of his first love whom he can’t marry (reason yet to disclose in coming episodes). This major twist also exposes the true intentions of Bibi Sahib who is using Kulsoom for her own interest. After the very first meeting with Kulsoom, Bibi Sahiba knows that how she has to play her cards. She creates this whole drama of helping Kulsoom in finding her true love but beneath it she has her own motives. The reason why she has done is yet to disclose but one thing is sure that this major twist has increased our interest in the drama.

This is not a secret that peer-fakiri has long deepened roots in our society where the innocent habitants considers peer as their ultimate savior whose taweez can save them from any bad situations .

Set in the suburbs of Lahore, the drama present excellent depiction of rural lives where people blindly follows spiritual peers and leaders.

For them, the words of a peer are like final orders from which can’t diverge at any cost.  A brilliant example of it shows in the drama where Peer Sahib lie about istikhara of Kulsooms’ shadi proposal and tells her parents to give her hands to Bilal. They all accept his orders and start making arrangements of for the wedding – completely forgetting that it is the same Bilal who is unacceptable to them a couple of days ago.

Besides, showing the dark side of peer-fakiri the drama also gives insight into the lives of those spiritual leaders who are victims of their own set traditions and norms. Although Peer Habibullah is a gadi-nasheen of some highly reputed position but within inside he is a common man who given equality to his better half and come out as a savior in the love story of Kulsoom and Bilal.

In fact, the nuances of Peer Habibullah character are yet to disclose because in the coming episodes his character is expected to overshadow with some gray shades. As far as acting is concerned, I must say every actor fit their role like a glove. They all are brilliant in whatever they are doing – be it Asma Abbas as a rigid and irritating amma, Saba Faisal as a subtle and mature divorcee woman or Saman Ansari as a graceful Bibi Sahiba.

Among the young lot, Sonia Mishal has really surprised me. She has that spark to be in the top leagues of our actors with her spot-on expression and brilliant acting. Bilal Abbas is also good as an intense lover.

The girl who plays Noman Ejaz’s wife is beautiful but her expression are artificial especially the pout she often projects looks odd.

Another surprised package of the drama is the Saqib Sumeer. The guy who plays physically disabled Haroon Bhai – a discovery from theater industry this guy has all potential to be the Nawazuddin Siddiqui of Pakistani showbiz industry. This is the first time I have Saman Ansari – there is no doubt that she is really beautiful and portray her character with required grace and elegance. But that pout she made throughout the play is totally unbearable – please somebody tells her even without it she is doing her job well .

As expected, Noman Ijaz is the star of Dumpkhut- Aatish-e-Ishq. He is one fine actor who can breathe life into any role with his solid performance. This time too, he has portrayed a spiritual peer with ease. It is always a treat watching him gracing the small screen!

If you haven’t watch Dumpkhut yet believe me you have missed out something really good. The drama airs every Wednesday on A-Plus, 8:00pm