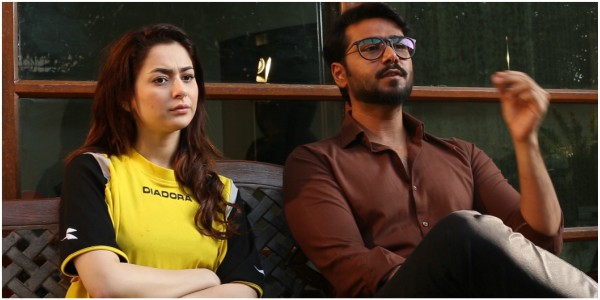 It was another fine evening when I got the chance to visit the set of another dynamic upcoming drama serial, Titli.  Directed by Ahmed Bhatti, it stars Janaan actress, Hania Aamir and Tum Kon Piya famed Ali Abbas in lead roles.

Written by Samina Aijaz the drama is based on a true story of a young married couple.

Just like most of our dramas the venue for the shoot was a luxurious bungalow situated in the posh locality of Defence. The main cast of the serial was busy in recording their scenes including Ali Abbas, Hania Aamir, Sharmeen Khan, Saba Faisal and Naeem Tahir.

As we reached the sets, we spot the director, Ahmed Bhatti, sitting in lounge making last minute amendments in to-be-recorded scene.  We asked him about the serial at which he told us this:

“Right now I can only tell you that it’s a story about a beauty and the beast twisted with a desi tarka. To get more details you have to watch it on Urdu 1,” he said with a smile on his face.

While we were chit chatting with Ahmed Bhatti, the drama lead actor, Ali Abbas, also joined the conversation. Wearing a casual shirt paired with denim he was totally in his character.

“This drama is all about a complicated relationship between two very different people,” he said. Abbas played Hania Aamir’s husband in the serial. He was shown as a typical middle class boy trapped in a circle of routine life.

Considering Hania as a novice actress Abbas initially had reservations about casting her in a role with nuanced characteristics.

“Initially, I thought Hania might not pull off that character well but I am glad she proved me wrong. She is a natural actor and has done her part with aplomb,” he said. “This has been consecutively my fourth serial with Bhatti so obviously we have great working chemistry but I must say that Bhatti has remarkably dealt with Hania. He allows her to come out of her comfort zone and delivers a mind blowing act,” he added.

Dubmash queen Hania Aamir also gave credit to the director for taking out a finest performance from her.

“Bhatti’s biggest quality is that he doesn’t let his ego comes in his way. Before every scene he used to come and tell me the minute details which has actually helped me to give my best shot,” she said.

Hania played the role of Naila – a carefree young girl who have woven a world of her own dreams. She makes every effort to turn her dreams into a reality.

“Naila likes to live in her own fantasy world and when the reality hits her she retaliate in an unbelievable manner,” the actress said while talking about her role in drama.

She also added that the one reason she opted for the serial was that the plot was close to reality.

“I agreed to be a part of it because it is about the real people. It is something our audience will relate to and feel connected,” she added.

The promos of the drama have already out and it is expected to air in the first week of coming month on Urdu 1.