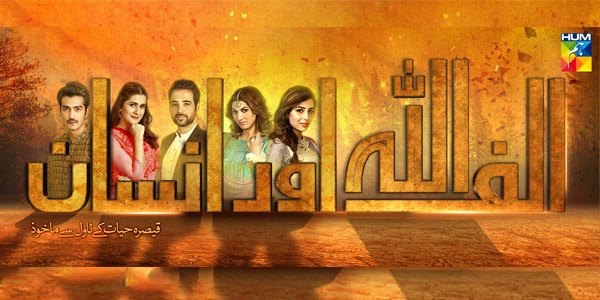 Breaking the stereotype images of majboor aurat and tyrant man  of small screen , Ushna Shah and Imran Ashraf,  have come out of their comfort zones and impressed us in the challenging roles in Hum TV recently on-aired drama, Ali Allah aur Insaan.

Based on best-seller novel of Qasiera Hayat of same title, the drama has been directed by Ahson Talish. The ensemble cast also included Meekal Zulfiqar, Kubra Khan, Shehzad Sheikh and Sana Nawaz.

As I said earlier, Ushna Shah is the surprised package of the drama – shedding off the avatar of an oppressed woman of small screen she has done a fabulous job as a roadside beggar, Raani. She has done everything right to get into the skin of the character from the desi accent, untidy look to spot-on expressions.

Khuda Mera Bhi Hai famed actor, Imran Ashraf is another highlight of the drama. In a role of an eunuch, he has once again impressed us with  his acting prowess. He has played Shamu with such a conviction that we can’t stop sympathizing with him. He aptly portrays the humiliation an eunuch has to face at every step of their lives. While watching him suffer we really want him to break the barriers and earn a decent livelihood just like any other individual.  My heart literally goes out when I saw Shamu’s Baji crying for her – she has raised her as her own child and it’s painful for her to let her child go away.

The drama is all about the mystic bond between Allah and His creation (human being) – the story has four different tracks including a love triangle of Meekal Zulfiqar, Kubra Khan and Shehzad Sheikh.

Unlike, Sang-e-marmar , Kubra Khan in Alif Allah aur Insaan plays a stubborn girl. She belongs to the class of the people who considers themselves superior than rest of the world. When a group of transgender came to perform in wedding of her elder sister, she yelled at them and asked them to leave immediately. Shamu got really hurt with her attitude and gave her buddua of not finding happiness in life.

How will Shamu’s buddua destroy Nazli’s life? What will Shamu do to change her fate? To know more about we are desperately waiting for the next episode of Alif Allah aur Insaan to air soon.