“I never use cheap gimmicks to earn ratings: Sahir Lodhi 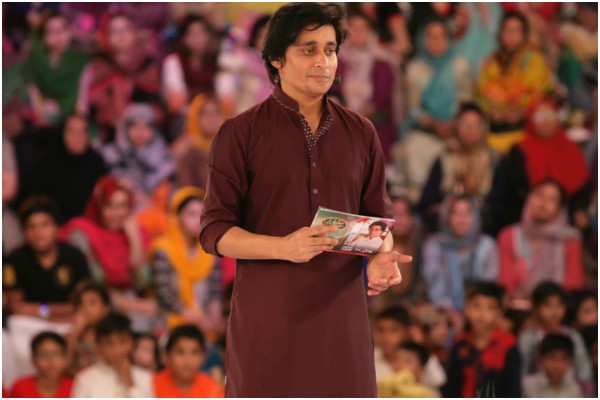 This Ramdan, while leading media entities are in for serious ratings war, there are some who restrain themselves in getting involved in this rut. TV One’s ISHQRamzan host Sahir Lodhi is surely one of them.

Sahir Lodhi has never been in favour of using substandard gimmicks to win a prominent position on the rating charts.

“I can’t make fun of my audience’s intelligence and put their dignity at stake by asking them to do ridiculous things on the show. They call me ‘Sahir Bhai’ – I go to their homes daily with my show and they relate to me. I can’t betray their trust and as a television host a big responsibility lies on my shoulders,” he said.

Sahir’s agenda is to spread the message of peace, tolerance and harmony through his program. He and his team has intelligently devised a show format which gives audience a fair chance to win prizes without humiliating them.

While a lot people criticize Ramadan transmission for being overly-commercialized, TV One’s host wants them to see the bright side of it.

“The lucrative gifts we offer in our show bring smile on thousands of faces who can’t afford such luxuries in their lives,” he stated. Sahir Lodhi’s ISHQRamzan transmission has a special segment, Dard-e-Ishq, dedicated to needy people where generous people donates their money to fulfill wishes of deserving ones. Once the show ends, a long queue of deprived individuals waits outside Sahir Lodhi’s green room where they discuss their problems with him. TV One live transmission staff calls it Sahir Lodhi’s OPD for fun.

“Mostly people with severe medical conditions and dire financial need approach us for help and we refer them to relevant persons and organizations that help them and solve their issues,” Lodhi told us.

Although Sahir Lodhi has spent a major part of his life abroad but his love for the country has been commendable. He leaves luxurious and comfortable foreign life and returns to Pakistan to serve his people in whatever capacity he could.

“I am a green card holder and I have an option to settle down abroad but I prefer to stay in Pakistan because I belong to this soil and I owe it a lot. I think the best way to return to our homeland is by helping its inhabitants,” he said.

Even in his directorial debut film, Raasta, he has made sure to use local talent and equipment.

“My film has Pakistani actors, musicians and technicians and I am sure that it is going to be the best movies our country has ever made,” he added in the end.